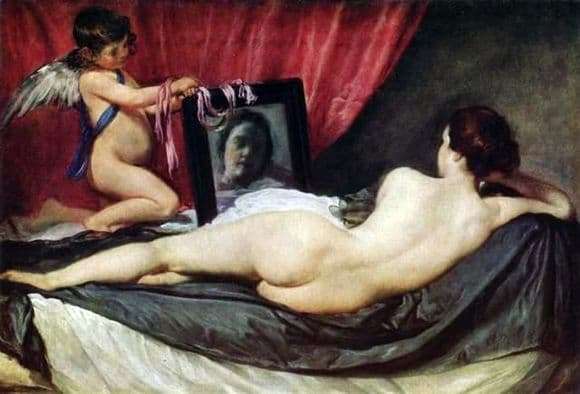 During the life of the artist Diego Velázquez, the Spanish Inquisition had a great influence not only on the lives and customs of people, but also on their work. In those days, images of naked bodies were strictly forbidden.

The artist who painted the portrait of a naked man could be sent into exile, deprived of church patronage, and his picture burned or repainted. Like many other creative people, Velasquez did not adhere to the strict framework established by the authorities, and created his one-of-a-kind creation “Venus in front of a mirror”.

In ancient mythology, the goddess Venus personified the symbol of love, as well as the sublime and beautiful beauty of a woman. On this canvas, it is depicted reclining on thin flowing bedspreads. She turned her back to the audience, her knees half bent. In ancient times, Venus is often depicted in this perspective. The artist focused on looking at the beauty of the female

body, deliberately avoiding the luxury of draperies and eliminating decorations such as flowers and jewelry.

The second character of the picture is Cupid, the son of a goddess. Instead of a bow and arrow, with which, as usual, he is portrayed, the child maintains a mirror turned to his mother. In the reflection you can see the fuzzy facial features of Wiener, meet his eyes with her eyes. Velazquez purposely portrays her reflection wrong, larger than it should be.

The folds on the sheets follow the contours of the figure of the Roman goddess. Thus, the artist emphasizes its softness and pomp of forms. The basic colors of the background composition are quite simple – it is white, red and gray, but the critics liked this gamma.

Velazquez, constrained by church dogma, could not put his picture on public display. Therefore, for a long time, it was seen only in narrow circles. Only in the 19th century it was transported to England, and to this day it is stored in the National Gallery of London.