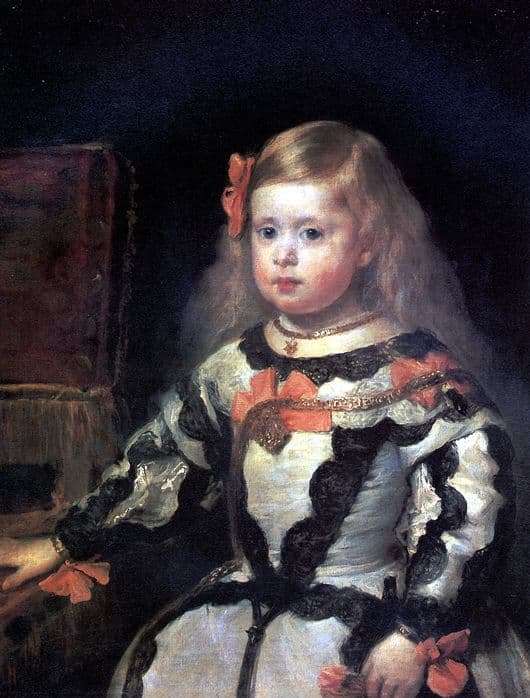 The work of the legendary Spanish artist of the XVII century, Diego Velázquez, which was written in 1655, occupies a key place in his work and belongs to the portrait genre, which was especially popular in the European art world in the times of Velázquez. Velázquez himself, being the court painter of the King of Spain, quite often depicted in his paintings members of the royal family, emphasizing the greatness of the ruling Spanish dynasty.

The painting of Infanta Margarita, who was the daughter of the King of Spain, Philip IV, and who later became the empress of the Holy Roman Empire, belongs to the mature period of the master’s work. It was at this time that Velázquez created the whole gallery of portraits of the Infanta.

In this picture, the future ruler has a cold and restrained look, which should have been present among the nobility of her level, while her look is also underlined, despite the fact that she is only four years old, as well as the bearing of the infant, which also shows that we have a representative of the royal family.

Despite all the static character of the infanta figure, skillfully depicted by Velasquez, it still amazes the manner in which the very image of a little girl, who is to become a great ruler in the future, is to be impressed. The soft features of the face and the swelling of the lips, together with the girl’s golden hair, give her a depiction of tenderness and warmth, despite the severity of her very appearance. The artist himself did not know that the infante was not prepared for such a good fate, because she became empress of the Holy Roman Empire only at the age of 14, and could only live for 21 years, but she managed to give birth to six heirs to the throne.

At this point in time, the picture is on display at the Louvre Museum – one of the most famous museums in Europe.