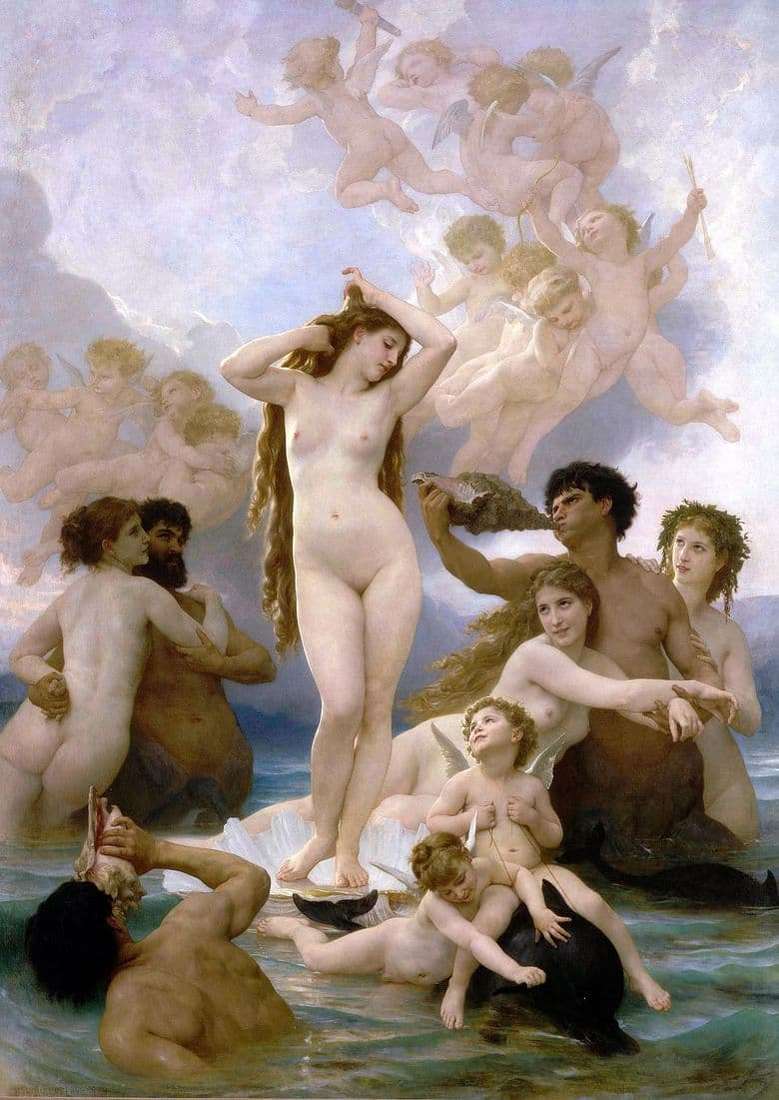 William Bougreau chose the famous myth about the appearance of the goddess of love and beauty, Venus, which, according to legend, originated from the coast of Cyprus from the sea foam as a plot for his picture. The composition of the scene is quite similar to the famous masterpiece of Sandro Botticelli, the genius of the Renaissance, but in both paintings the hand of the author is clearly visible, you can see traces of the time in which the work was done.

The picture of the Hill is light, airy, made in bright colors, almost glowing delicate colors. Despite the many sensual revealing images, it leaves the impression of unsophisticated naturalness, ancient simplicity.

The center of the composition is, by right, Venus itself, staying on the shore standing on a huge sea shell. Her posture is elegant, a little flirty, full of dignity. She is well aware of the power of her spell, but

here she looks like a woman who barely awakened from sleep. She is obsessed with herself and does not pay attention to those who welcome her. Sly look from under the eyelashes goddess rushes to the viewer.

Her arrival is proclaimed by sea men who blow the shells. Dark-haired and dark-skinned, these three figures are very different from all the other characters in the picture. They surround their goddess, not daring to get close to her, but in their hands are no less beautiful white-skinned women. The poses of all the participants clearly hint at the carnal union.

The exception is two children in the foreground. At the feet of Venus, they play with their little dolphins behind their backs. These are angels who have broken away from the host of their brethren, circling in the heavens above the head of a pagan deity. Or, perhaps, a flock of cupids, because in the hands of angels squeeze a bow, a quiver and arrows that can kindle a flame of passion in the heart of a man.