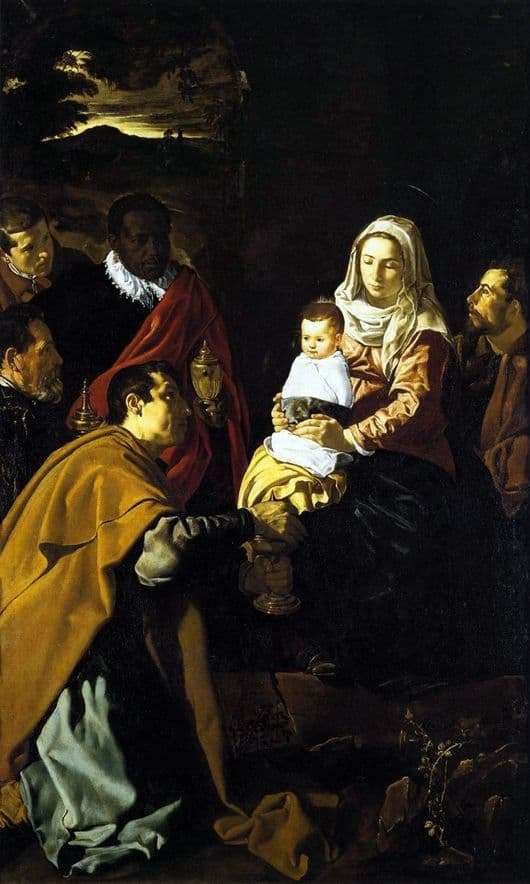 How many painters wrote their canvases on this topic! How many canvases are exhibited in various world museums under this name. But this canvas Velasquez simply impresses with its calmness and chastity. The most interesting thing you still understand is that they depicted this topic, completely unaware of the true events and details. I lead to the fact that the reading of an important biblical episode is interesting, but erroneous through and through. Get at least their clothes.

Velázquez, not knowing how the Palestinians are dressed or the Jews, dressed all the characters in modern clothes. And the Baby is not at all in the manger, but on the mother’s lap. And the three wise men look altogether like three respectable city lords, and the only thing that betrays their mission is three covered bowls. And so, do not be these items you would have thought that this is a social visit to the name day.

so it is the appearance of the Virgin Mary and the Baby. Humility, prettiness, a kind of destiny… And the background of the canvas? Velazquez didn’t draw a lot of it, but on the left of the canvas we see a landscape and he is depicted during sunset. Isn’t it Calvary? That is the place of execution of Christ. And here you are surprised at how clearly and succinctly the painter conveyed the whole path of Christ – from Christmas to Resurrection. At the same time, only the clear mountain landscape illuminated by the setting sun speaks about the latter. True and the landscape turned out to be painfully European, because the author has never seen the land where Christ was born. And all the painters of the Middle Ages suffered this, not only Velasquez.

But still the canvas is beautiful, although it seems dark. But as a bright bright spot attracts the appearance of the baby. His children’s eyes are already thoughtful. Surprisingly, Velasquez Infused the baby, did not give him space. When, like other authors, they tried not to swaddle him, to portray, as it were, prostrate for the world.