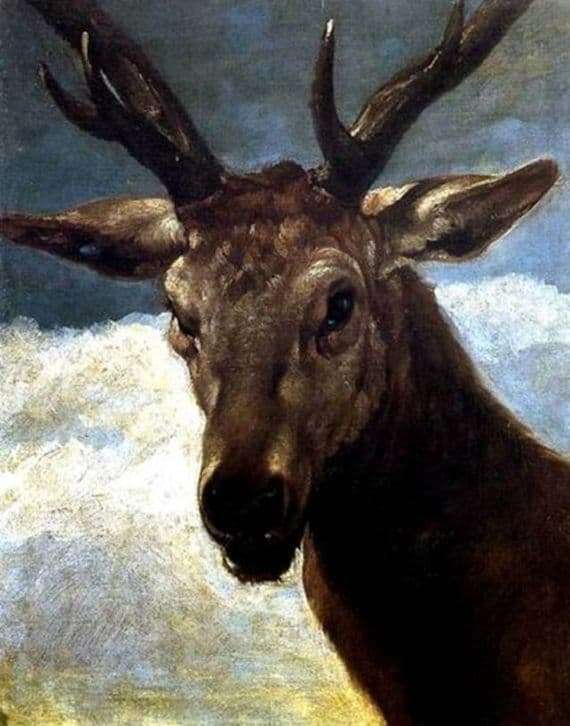 The picture was painted in 1634 in oil on canvas.

Cloth refers to the artistic style of the Baroque in the genre of animalism.

Diego Velázquez is a 17th century Spanish artist. He was born into a noble family. Since childhood, showed great interest in painting, and his father decided to give his son to learn from the famous artist of the time Herrera.

To become an artist for a nobleman in those days was not prestigious. But to learn from the famous Spanish artist Velázquez could not more than a year, as they did not agree on the characters. Then he began to learn from the no less famous Pacheco.

Velazquez already at an early age showed great ability to paint landscapes and portraits. His work became known at the royal court and he was invited there. There he became an artist at the court, his workshop was located next to the king’s apartments. In addition to portraits of the royal family, Velázquez wrote at the court the so-called equestrian and hunting canvases. He performs them on the terrace.

The painting “The head of a deer” actually depicts the very head of a wild animal. The paintings of the artist did not differ bright and catchy color. He often used a black and gray or brown background. But this did not reduce the depth and realism of his canvases. This can prove the great skill of the author.

The deer is depicted so realistic that it seems he will come out of the picture and walk alongside. How skillfully smooth lines depicted wool on his forehead. His canvases are filled with severity and ease at the same time. A thin layer of oil shows us the texture of the canvas. The artist skillfully could convey light and shadow effects in his works.

His work has become a great legacy of Spain and the world. The artist created his canvases without sketches; he could masterly write any portrait or landscape at once.

The painting is in storage at the Prado Museum. Spain.