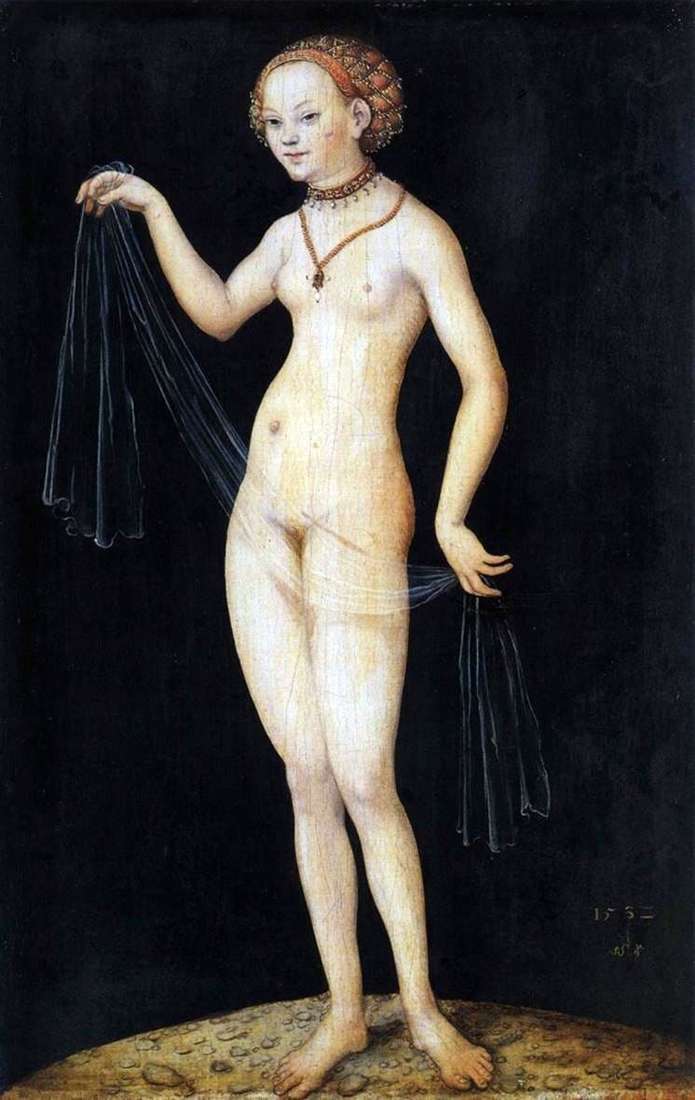 Lucas Cranach Sr. portrayed Venus, based on the ideal of feminine beauty, which was popular in the Renaissance. A thin, even anemic figure, light skin pale to blue, large bulging eyes, some kind of emaciated angularity in the figure, high forehead, thin arms and legs, long thin fingers – these parts of the body tried to emphasize in their middle-aged women.

They purposely tightened their hair very tightly on the back of the head, so that their eyes would turn out to be slightly bulging, they would shave their foreheads to make them appear very tall. Women diligently avoided being under the sun so that the skin was pale.

And Venus Cranach – angular figure of a teenager, pale skin, thin long arms, which emphasizes the transparent, weightless scarf, which she holds in her hands.

Hair is tightly tied at the back of the head, tucked away under an ornate net. There is a precious necklace around the neck, a stylized cross on a chain. The transparent veil in her hands does not cover anything, because, probably, the girl holds the veil even shyly, although her gaze suggests the opposite: her eyes are very flirtatious, as if seducing the viewer.

In the days of Cranach the elder, artists very rarely wrote nude. Naked female figure is usually depicted only mythological or narrative scenes. Cranach also naked bodies wrote in a somewhat primitive style, rejecting the classical canons and the spirit of the time. This is not surprising, because Cranach was a Protestant, spoke with Martin Luther, welcomed the reformation.

Formerly Cranach the Elder was struck by the beauty of Princess Sibylla, whom he, on behalf of Johann Solid, wooed for his son Johann Friedrich. Since then, all the female characters of his paintings were like Sibylla. Here is Venus: a bony face, narrow, slanting, narrow eyes narrowly, a small sharp chin, a sugary sweet smile. These facial features very much resemble the face of a princess.

The style of Cranach in the spirit of the Northern Renaissance as if contrasted to the magnificent women of the Renaissance of the Italian, southern. Cranachov Venus – long-legged, thin, angular-teenage type. The undeveloped maiden bosom, the anemic figure became for a long time the standard of feminine beauty of the “Cranach type.”