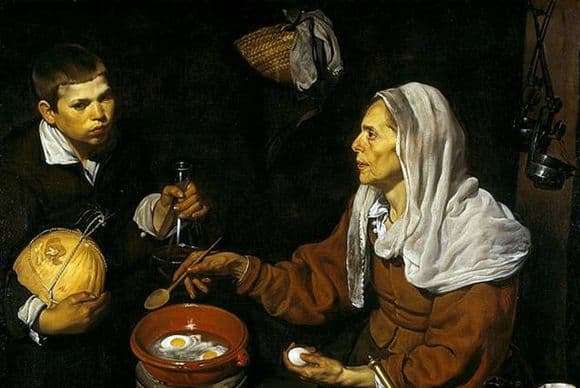 Velazquez depicts a cook who cooks scrambled eggs. In her hands is an egg and a spoon. Nearby is a servant. In one of his hands – a carafe of wine, and in the other – a melon. But these subjects can not say anything about the essence of these heroes.

We feel that they are not just calm and far from vanity. They are completely immersed in a poor life, which is inelegant and very difficult. But they are stately solemn. That is why only real epic heroes come to mind. The old woman, as if some kind of Pythia, performs sacred rites over the fire. The youngster is perfectly focused, as if he were Romulus, who was to found Rome. But why are they so majestic among ordinary supplies and pots in the kitchen?

Velazquez depicts how stately the poor can be. The hands of the boy and the old woman freeze over the fire. They do not touch, but the characters feel the presence of another. If you do not take into account the characteristic of rough life accessories, you would think that the painter depicted a certain sacrament (energy is transmitted from the wise old age of youth).

The clay frying pan and the mortar are incredibly voluminous. In the background, darkness is the most condensed. It seems that the painter is mysteriously silent about something. This is the main attribute of the royal beginning. Velazquez depicted the cook truly solemn. Almost regal. Her profile is similar to the one that is usually minted on medals. All items are similar to cast metal. The commoner has become a monument to himself. In this case, nature is not corrected. Academic ideality is absent. Life is not at all like life.

The meaning is recognizable and open. But the UN is not the main one. Much remains a mystery. The viewer does not understand where the action of this picture takes place. Other details are also unclear. We can not understand how the old woman and the boy are connected. Here all this is not so important, since the meaning of the canvas is much deeper and more significant. The picture takes on a generalized meaning. Velázquez makes sense of modernity and conveys his attitude towards poverty.