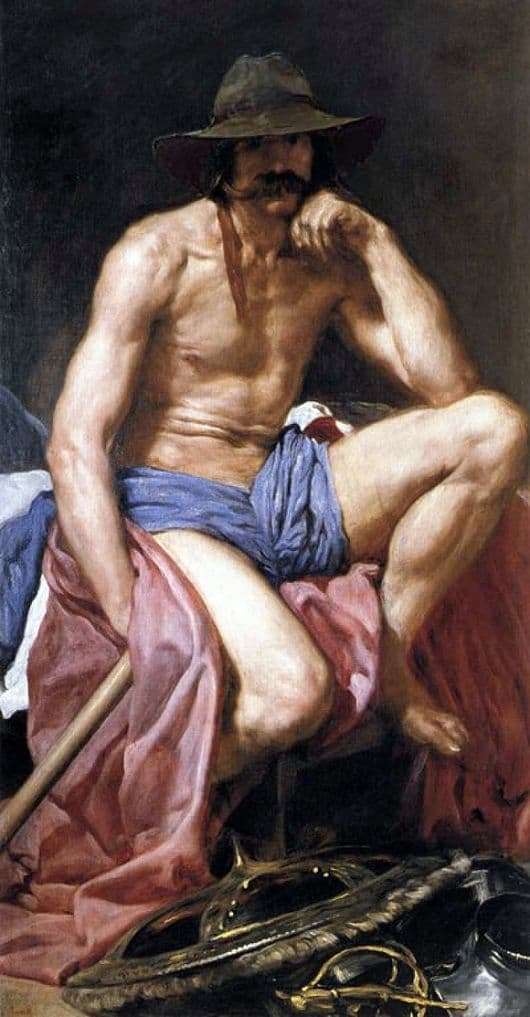 The painting was painted by the famous Spanish painter in oil on canvas in 1640. The peculiarity of this painting is that it, in combination with some other works by the artist, was written for King Philip IV, at whose court he served as a painter by the author.

This portrait was supposed to decorate the hall of the king’s hunting castle, which determined the subject of the painting. After all, according to ancient Italian mythology, Mars was originally a wild and primeval god of nature. And only a little later, they began to identify him with military art.

The picture depicts a physically strong, muscular, strong man, the armor of which lies at the foot of his bed. A little tired, but very manly and firm look, a magnificent and beautiful mustache, a little mannered pose – everything speaks of dignity and honor, courage, strength and protection for all living things.

A semi-nude figure brings him closer to naturalness, adds nativity, virginity. He seemed to be related to nature, organically and naturally fit into the structure of the surrounding landscape. Mars is like the personification of natural beauty and naturalness.

At the same time, his posture adds a certain amount of irony, mannerism, which already speaks of intimacy with human nature. The painting depicts metal armor corresponding to the armor of soldiers of the time of the author. Which also emphasizes the thread of unity between God and man, between nature and people, which can be traced throughout the image of Mars.

In his hands, Mars holds a spear, which personifies power and power in control. The same spears took the knights of that time with them to the war, emphasizing unity with God Mars and seeking his help and protection. In general, the picture is very emotional, capacious and lively.