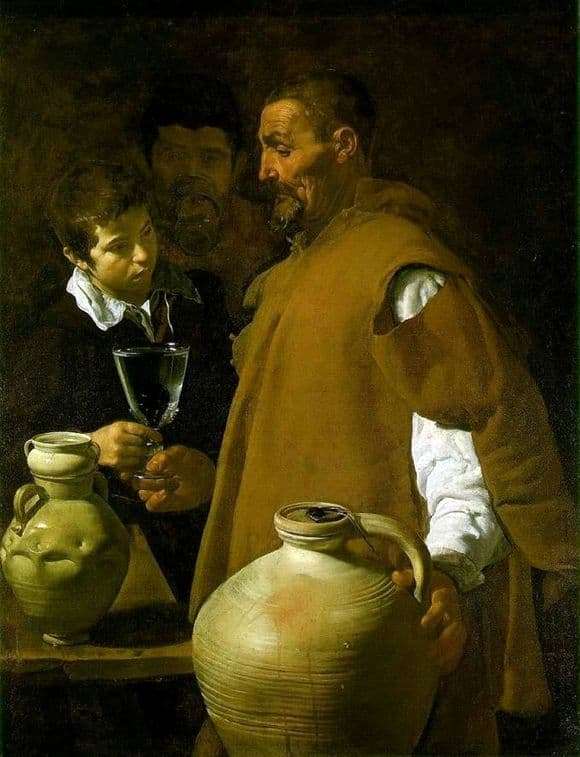 The painting “Water Carrier” was painted in 1622 by the unusually gifted and educated Spanish artist Velasquez. She also has another name – “The seller of water from Seville”.

With this picture the artist added to his cycle of works of bodegones (translated from Spanish as a tavern). A number of paintings are included in this cycle, but “Waterser” has become the brightest pearl of the gallery.

Contemplating this canvas, we, as if, see through the window moments from the life of a simple person of that time, so brightly and realistically every stroke of faces, clothes and objects is conveyed.

In “The Water Seller from Seville”, Velazquez appears to us not only as a venerable creator of his paintings, but also as an attentive observer, as a person who wonderfully understands people’s feelings, emotions, knows their history and traditions.

The picture depicts an elderly man – a water partier, this is how the heretics were ironically called sectarians, who did not eat either meat or wine, and put ordinary clean water at the head of everything.

It can be seen with what sense of significance the water-carrier transmits a clear glass to a young teenager and, with what reverence, the boy accepts this glass.

Some kind of fascinating secret blows from this picture.

A strange water carrier, immersed in his own thoughts, a boy, on whose face reflected meditation, a strange, dark figure of a large man in the background.

Hands on the leg of the glass, as if to symbolize the meeting of two times, the old hand conveys youth to the water. Water has always been a symbol of life, so what is the vital that the elder gives to the child?

Some art critics claim that the picture is filled not so much with an open sense, as with an allegory. In the center of the picture, a glass of water stands out with a bright spot. At the bottom of the glass you can see the fig berry.

Perhaps the fig is used to give the water a special taste, and perhaps the artist wrote this detail due to the fact that the fig is a symbol of eroticism. Then understand the seriousness of the boy and the detachment of the water carrier. The water carrier only offers a forbidden fruit to a youngster, and the boy’s choice is to accept or reject such a symbol. The youngster takes a glass.