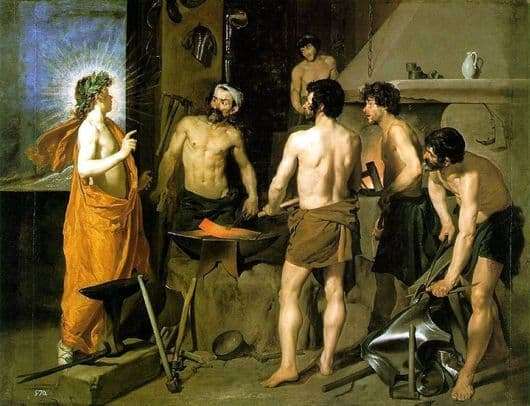 The whole plot, taken from the mythology of ancient Greece, is interpreted by the painter in a very original way, considerably complicated. In the picture, Velázquez depicts the moment when Apollo tells Vulcan, the god of fire, that the goddess Venus is unfaithful to him.

No touchdown in the created composition is felt, but at the same time it is felt that the author is ironic. Despite the fact that around the Apollo radiance, in his image and through the prosaic. The volcano and those who help him are also devoid of divinity. These are ordinary people. There is a complete feeling that we hit the then-smithy of the Spaniard-smith, who was caught in his usual occupation.

All domestic concreteness of the situation is also strengthened. The myth was about a cave and a fire-breathing volcano. Velazquez also portrays an ordinary forge. Just perfectly depicted hearth, which is located in the depths of the forge. The room is illuminated with a flame of pink-orange-yellow color. The spectator sees even the smallest sparks that hang in the air.

The overall tone of the canvas is light brown, in which yellow shades are masterfully introduced, as well as brown and red. With the greatest force they sound in a cloak of the sun god, in a colorful sheet of iron, which is red-hot to the limit and hot in the flame. The painter also introduces shades of a grayish-blue color. This, above all, the sky, a wreath of Apollo.

Velázquez masterfully developed characteristic gestures, special postures and certain facial expressions for all the characters. The viewer sees as hammers, frozen in different positions. This suggests that the work was unexpectedly interrupted.

There is a feeling that this picture was written not on the basis of a mythological plot, but on a domestic topic. Such a new reading of the ancient story was quite bold and new in the days of the painter.