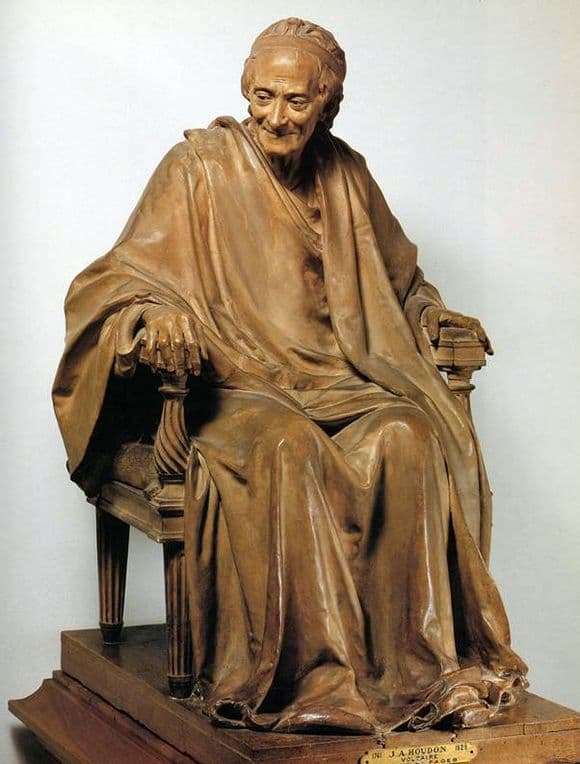 Sculpture of Voltaire, made by Jean-Antoine Houdon, is considered the best work, exactly, conveying the image of the great philosopher. Shortly before his death, Voltaire agreed to pose for the sculptor. At that time he was eighty-four years old. Marble sculpture is famous not only for the amazing work of the author, skillfully conveying complex textures of clothing and leather, but also for his ability to emphasize a sharp mind, as well as the energetic character of the philosopher.

Houdon completed his work on the sculpture of a thinker in 1781. Empress Catherine II made an order for her, and after 2 years the statue was transported to Russia.

The author decided to create the most profound philosophical image, suggesting that thinkers existed since ancient times, so Voltaire is depicted in an ancient-style robe. Under the deep folds of clothing hides the thinness of an elderly person; nevertheless, his figure appears majestic and slim.

The manner in which Houdon performed the look of soft shiny fabric involuntarily arouses admiration from the viewer. Old age does not spare even great people; therefore, Walter’s thin face and thin neck have wrinkled deep lines of wrinkles. His dry hands hold the carved armrests of the chair on which the philosopher sits.

From a distance, the viewer seems to think that the thinker looks tired, and he is completely immersed in his thoughts. But with a closer look in his eyes, one can read expressiveness and mockery of physical old age. Until the last day of his life, Voltaire retained a clear look and sober mind of a young man.

The main feature that unites all the work of the sculptor Houdon was the creation of a complete presentation of the psychological portrait of the person who poses for him. To make his creation more natural, the author did not try to smooth the traces of the incisor with which he worked.