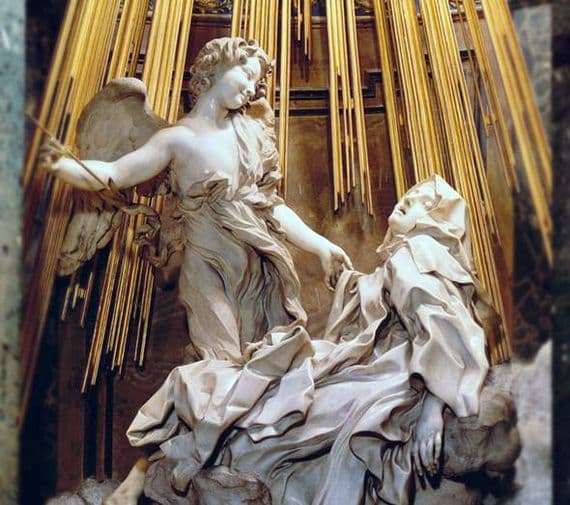 The Ecstasy of Saint Theresa is a sculptural group of L. Bernini, a famous Baroque period sculptor. The sculptor was inspired by the letters of Spain’s nun Teresa, declared holy by the Catholic Church.

In her letters, Teresa described the wonderful visions of angels and saints. In one of them, for example, an angel appeared to her with a wonderful golden arrow. Teresa wrote how she was filled with love for God, as well as a feeling of wonderful sweetness. These feelings and formed the basis created by Bernini sculpture.

The sculptural group is made of white marble. The figures are located in the altar niche, among the columns made of colored marble. The columns and the figure itself are on a background of bronze-colored rays. So the sculptor decided to portray the divine light.

In this figure, Teresa is in a special state of spiritual bliss. From this she lies with her head thrown back. It is visible, as she is captured by the languid feeling. A nearby angel thrusts a golden arrow into her heart. Teresa is in heaven. Therefore, the angel’s hand guides her life, therefore she has a wondrous feeling of peace, ecstasy.

To work with marble requires a huge talent. And Bernini had it, judging by how he managed to convey such high feelings. Bernini seemed to accomplish victory over marble and made it soft and plastic, like wax. It seems that the sculptor did not cut this figure out of marble, but molded it. Thus, he managed to combine sculpture and painting.

The marble surrounding the sculpture is not without reason chosen in color. By this the sculptor showed the immense power and depth of the feelings of Saint Theresa.

To complete the perception of the sculpture group, natural light is best suited. It is he who best conveys the full depth of the creative intent of Lorenzo Bernini.