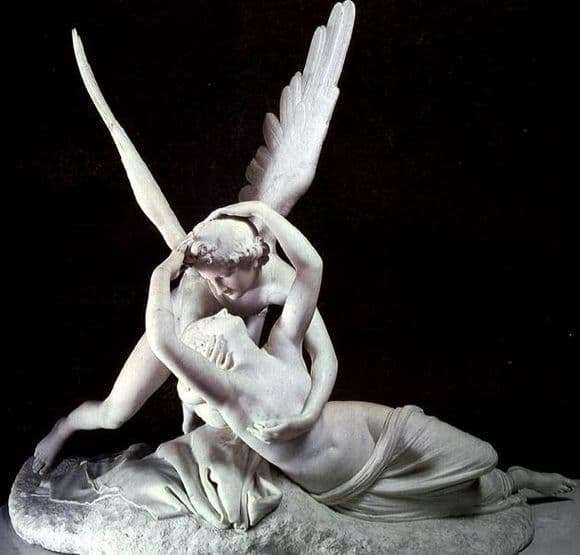 The creator of the famous work “Cupid and Psyche” is the Italian author Antonio Canova. The famous master made her marble to order. It was in 1787 in the Italian city of Naples, a Scottish baron Caudor wanted to have such a figure in his collection.

The fragment was borrowed from the work “Metamorphosis or the Golden Donkey”, written by the author Apuleius from Ancient Rome.

The first is the most famous. In it, Cupid enlivens Psyche with a kiss. And this moment of awakening and captured the author. Lovers hug each other. Cupid gently raises Psyche, who awoke from a long sleep. She got into this state because she was very curious. Having brought an amphore from the realm of the dead to the order of Venus, Psyche opened it, although she was strictly forbidden to do so.

The second sculpture depicts the heroes of the work standing. Cupid hugs Psyche, who laid her head on his shoulder. They look at the butterfly, stand on a dais, at their feet there is an ornament of flower garlands. The top of the base could be twisted using the integrated handle.

But since difficulties arose with the transportation, these creations stood for a long time in the workshop of Canova. People went to visit him to admire the great creations. February frosty day in 1798 troops came to Rome led by General Berthier. And in 1801, Joahim Murat bought the work, who became a relative of Napoleon a year ago, who took his sister Caroline as his wife.

The sculptures were taken to a country mansion not far from Paris. A year later, the sculptor Canova arrived at the Villaer-la-Garenn Palace, to see how his masterpieces were installed. At the beginning of the nineteenth century Murat made his possessions wider, creating a house resembling a palace. And after twenty years of composition, which were already in the collection of the emperor, hit the Louvre Museum.