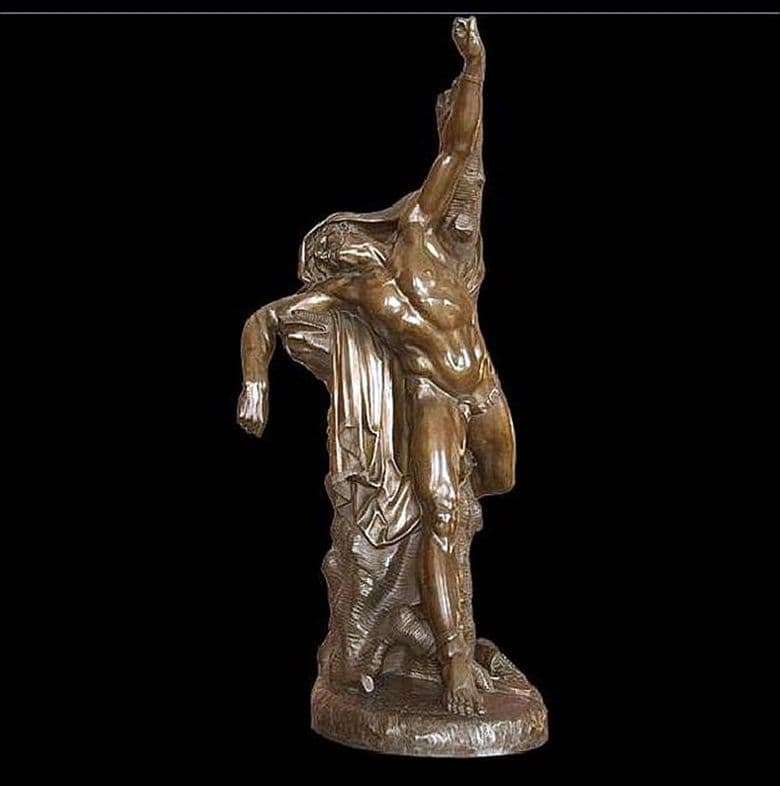 One of the most remarkable works of the sculptor, a talented representative of the generation crowning the Russian sculpture of the XVIII century, is the unforgettable “Polycrates”. The plot, which tells about the death of a tyrant, executed by opponents, is borrowed from ancient Greek history. The ruler of the island of Samos stood out mercilessly. He was always accompanied by luck and success, but he was punished for arrogance, arrogance and stinginess. The motive of crucifying the dictator appeared to the master in rebellious Paris and became for him an allegorical reaction to the events of the modern era.

In the image of Kozlovsky, the hero is crucified on a chopped off trunk of a spreading tree, at his feet lies a warped wheel of fortune and an inverted cornucopia – symbols of good luck turned away. The whole figure of the character is tense, he is completely captured by the boundless vain effort to break the shackles and break free. All muscles are unnaturally strained, each muscle stands out prominently, arms outstretched: one is chained up, the other hangs helplessly in a half-bent state, and the head has leaned back exhausted, falling on its shoulder. The face is disfigured by an expression of despondency, it froze in death-weeping.

The statue is presented in an intricate turn, to get the full impression you need to examine it from all sides. The sculptor showed the most critical moment of the torment of Polycrates, defeated and executed.

In this work, the author reached the summit of expressiveness and relief of the image of the deepest human feelings with the help of plastic solutions, which was facilitated by a remarkable awareness of anatomy and the creation of a work from nature. This sculpture is complex in its meaning and tragic, it reflects the progressive thoughts of Russian enlighteners – the ideas of civil courage, service to the motherland, love of country, social vocation. The sculpture is filled with philosophical content. The image of the hero is an allegory of not broken martial arts and the failure of the spirit.