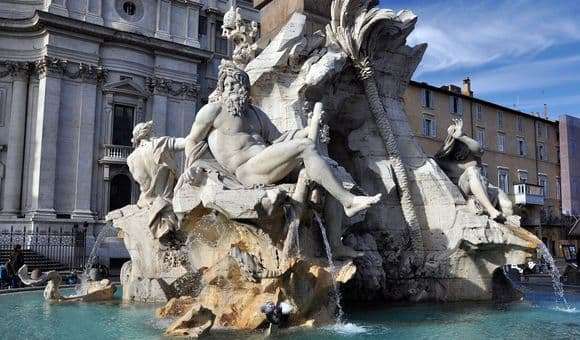 One of the most magnificent creations of Bernini is located in Rome in Piazza Navona. In the center is the obelisk (although it is pseudo-Egyptian and is not related to the sculpture of the master). An interesting fact is that Bernini was not allowed to compete for the development of a project to install an obelisk. But Pope Innocent X’s vanity helped Bernini bring his creation to life. Seeing the project of the sculptor, Dad decided to entrust the work to him, and not to Borromini, as it was previously intended.

The fountain draws attention with the elegance of the sculptures that make up the composition, their organic layout and ideally compatible forms. The fountain also organically fit into the architectural ensemble of the square – it is now difficult to imagine it without Bernini’s sculpture in the center.

The sculpture got its name from the light hand of the master, who decided to combine in his creation 4 rivers from around the world. Here the Nile found its incarnation, which is considered the heart of Africa, the Ganges is the sacred river for the Hindus, the Danube, as Europe’s largest river (known at that time), and the small river La Plata, which symbolized the New World.

The symbolism of the sculptures does not end there: the position of river spirits, their movements and robes tell the whole story. The sculpture of the spirit of the Danube holds the symbol of papal power and the emblem of the Pamphili family, which at that time was in power. Bernini placed gold coins alongside the spirit of the little river of La Plata, because the New World was very rich.

The spirit of the Nile is covered with a veil, or rather his face is not visible. There were two reasons for this decision: they had not yet learned where this river originated from, and as a sign of respect for the works of opponent Borromini. The spirit of the Nile is turned to the church of Sant’Agnese, whose architect was Borromini. Fearing that the facade of the building could collapse, Bernini showed his respect for the work of his rival.

It is also known that the sculptor did not work independently on statues. They were performed by his students, following the sketches and precise instructions of the teacher. Bernini created the project and led its implementation. Perhaps this was the reason for the absence of unsurpassed plasticity of the movements of the statues, which was always inherent in the works of Bernini himself.