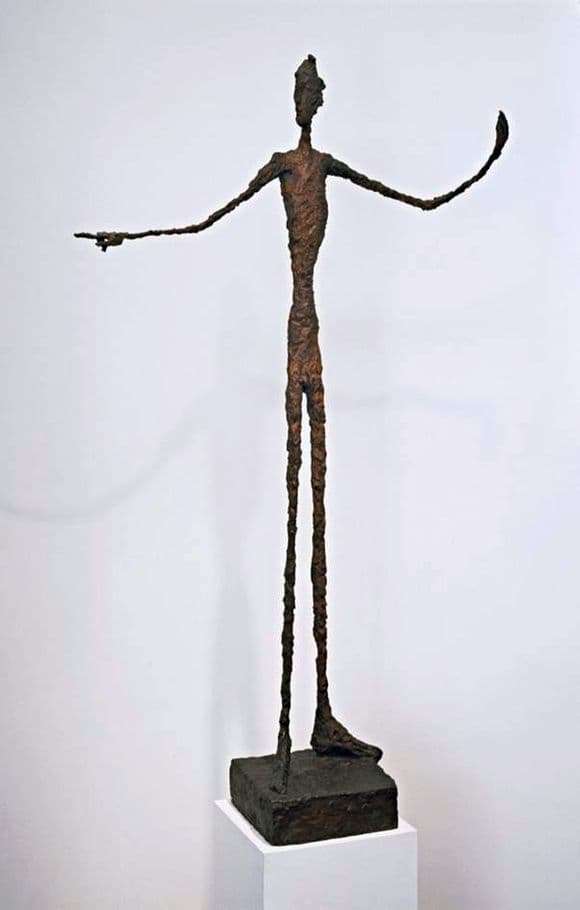 Alberto Giacometti is one of the highest paid sculptors in the world. He lived in the last century, but his work is still being auctioned for millions of dollars.

In his work he used an unusual surrealistic approach. For a unique and non-standard style of performance Giacometti gained a lot of fans of his work.

Difficult feelings and contradictory emotions aroused the sculptor’s creations in the audience. However, he did not have followers who would work in this direction. The works of Giacometti were the result of the embodiment of his extraordinary outlook on life and subtle mental organization.

Despite the fact that, in his work, the ingenious author liked to experiment with shapes and textures, his fad was the sculptural image of elongated figures that do not have weight and density. Thus, he developed his own unique and recognizable style.

The sculpture, called the “Pointing Man” is one of the most amazing works of the master. The thin, almost dried, silhouette of a person symbolizes his role in the modern world. His weakness and loneliness. Inability to withstand the crushing blows of their own destiny.

Giacometti invented his masterpiece and brought it to life in 1947. Just one night spent on it. When he presented this sculpture for all to see in the art gallery, it created a great sensation among the audience.

The sculpture reaches a height of 1m. 80cm. Its uniqueness lies also in the fact that the author personally applied paint on the bronze base. Initially, the auction organizers expected to receive $ 130 million for it. But the auctions were more successful than expected, and the sculpture went under the hammer for 141 million.