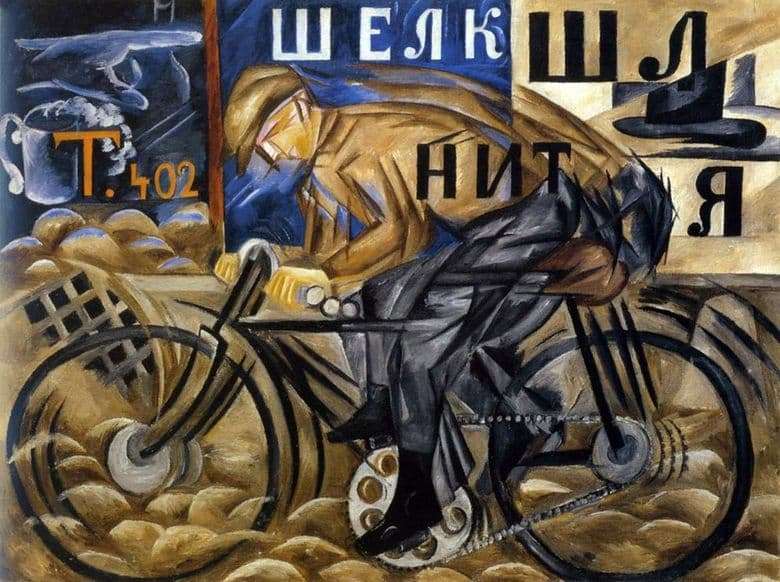 Natalia Sergeevna Goncharova is a representative of a noble family, to whom the wife of A. S. Pushkin belonged. She spent her childhood on her father’s estates in the Tula province, and when she became an adult, she repeatedly complained that she had to live in large cities – Natalya Sergeyevna was quite comfortable with rural life.

Wherever the artist traveled, the village and the village life have always interested her more than city life. Goncharova worked a lot on the illustrations of books; like many of her contemporaries, created theatrical scenery. Goncharova’s style was formed, on the one hand, under the influence of icon painting and Russian popular print, and on the other hand, under the strongest influence of the primitive’s style. Images on the canvases of the artist to the plane and have a recognizable rhythm. After the revolution, Natalya Sergeevna was fascinated by cubism and futurism,

Painting “Cyclist” – the clearest example of futuristic painting. It has all the noticeable signs of this direction, such as: multiple repetition of individual fragments, displacement and duplication of contours in some places, thereby creating the sensation of an object moving in time. The use of street signs in the picture is also characteristic of futurism; but, unlike most works in this direction, unbalanced and asymmetrical, the “Cyclist” is perfectly balanced and clearly calculated in space. The man in the picture is dressed in dark gray pants and a brown shirt, with a cap on his head. Crouching behind the wheel, he frantically pedals. Road pavers traced in the form of repeating round spheres, thin wheels, as it were, get stuck in it. The main idea of futurism, the idea of the dynamics of the century,