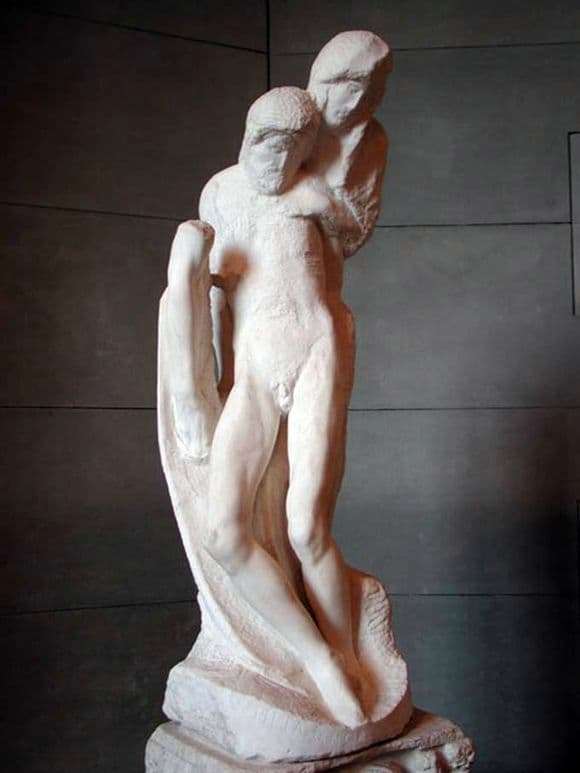 This sculpture was the last work of the master. Almost until his death, he actively worked on its creation. The composition is two-figured. We see Mary and Christ merged into one. The proportions of the figures are deliberately lengthened. The impression of their fragility and weightlessness. Involuntarily recall the statues of antiquity.

The concept of this work is really tragic. Man is lonely and doomed. All forms are broken. Grief can be read on faces. Heroes are completely detached from life. Master tried to express the tragedy of loneliness. Artwork unfinished. And this fact is perceived as a special idea of ​​the author. Only such a form can express the acuteness of an experience. Michelangelo sought to convey the unity of the Son and the Mother. They are united in one mass, striking us with pathos and tragedy. The body is emaciated, so there is no hope that it will return to life. Mother tries with visible effort to hold the body of her beloved son.

The viewer has the overall impression that these mournful figures are absolutely incorporeal. They are incredibly expressive. They are full of despair. They are lost in the big world. The mother is unable even to part with her son. We do not hear her crying, screams of horror, we do not see a broken arm. Grief is impressive silence. Michelangelo was able to convey his own feelings in such a spiritualized image. He knew firsthand what loneliness is. In this work, you can read the master’s farewell to life. Originally Michelangelo wanted to portray Christ with his arms spread wide. But in the process of work, and it is no coincidence, he radically changed his idea. Hands of Christ tightly pressed. There is no external connection between mother and son. Inseparability is internal.