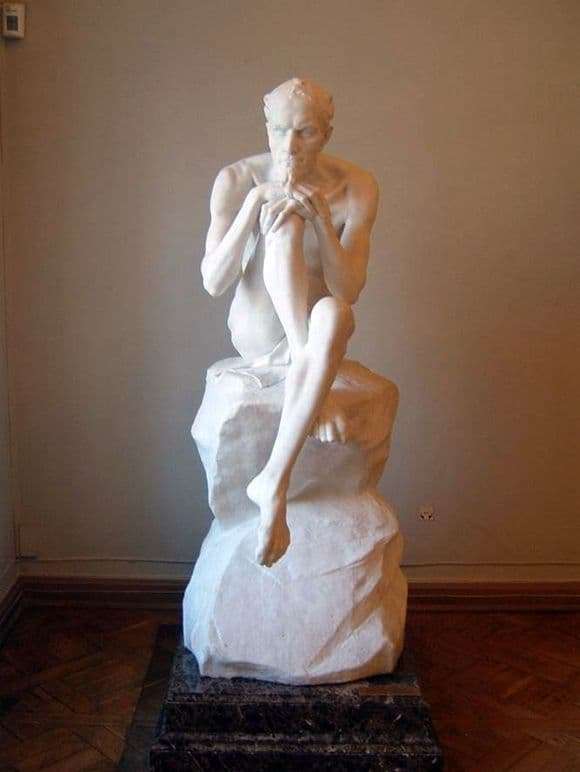 The famous sculptor worked on his sculpture for several years. He began work in 1874, which led simultaneously with the image of Christ. In 1879, Antakolsky creates a bust, which later imposes several sketches, and in 1883 he leads to the execution of his plan. The Hermitage received in his collection the work of the famous sculptor in 1897.

The creation of the devil, who constantly tempts a person, tests him, sets as his task to take possession of the human soul has always been interested in genius. Antakolsky took his own interpretation from Goethe from his famous “Faust”, who was not only portrayed as a tempter, but also a destroyer and denier of the integrity of the picture of the world.

The sculptor of the literary hero transfers to the image. Then he moves away a little from the Goethe’s hero and gives him his own vision, understanding. He conveyed to him the features of his society. He is portrayed as nervous, sick, irritated, just such an artist sees the society of his time. The sculpture came out not only as a source of evil, but also a source of inner experience, emptiness, irritability. Antakolsky portrays him naked, devoid of any clothes, thereby, as if he exposes the problems of society.

In the sculpture of Antakolsky, quite a complex relationship between good and evil is traced. Sharpness of the body, long fingers, clavicle, protruding forward, face, excessively pointed – it all looks like a bunch of negative energy. The pose looks outwardly as unstable, tense, very close to the way of death. In this image, everything denies life: forever frozen smile of fatigue, and tight lips, and a sharp beard. It seems that he only for an instant lost activity, he seemed to lurk in anticipation of a new sacrifice, from which it is possible to pull a soul out for eternity.