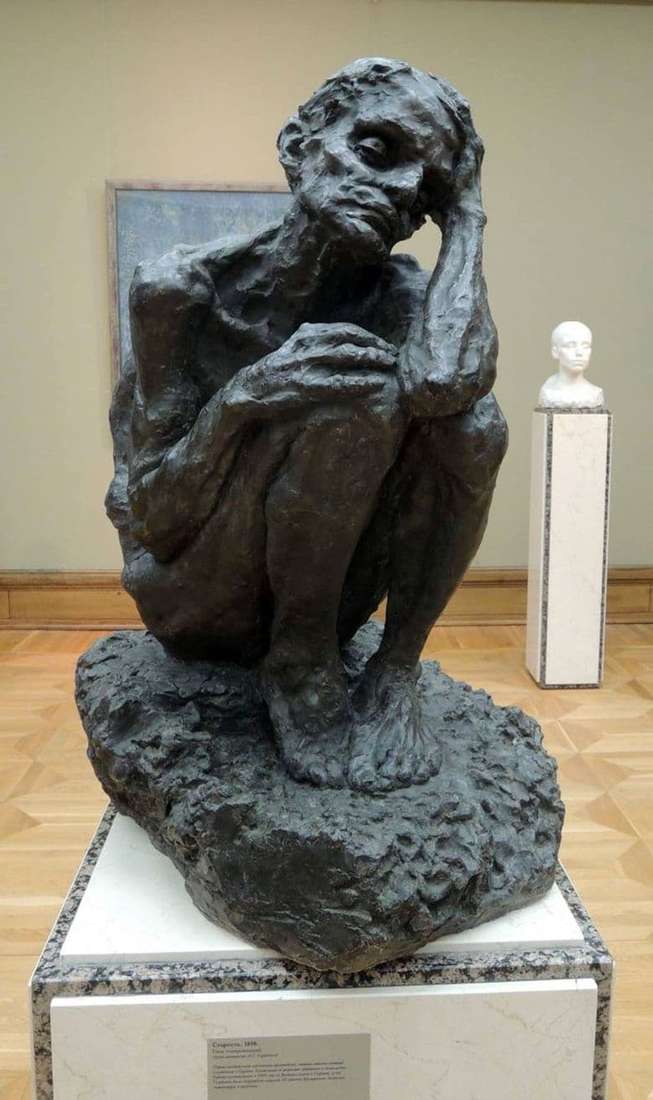 This sculpture was born in Paris. A. S. Golubkina, Auguste Rodin’s student herself, invited a woman to pose for herself, who had once been a model and posed for the master Rodin himself.

Rodin once created the sculpture “The one that was beautiful Olmer.” The sculpture is completely ruthless, defiantly naturalistic showed to the world the decrepitude of old age. Golubkina in her work has invested a deep philosophical meaning of the cycle of being and death. An old woman sits in a fetal position in the womb, which only underlines the spontaneous alternation of life and death, their incredible circulation. The pedestal, on which the woman sits, symbolizes the earth as a place where a person between entrance (life) and exit (death) finds some rest, a breather on the way along a closed whorl, as inexorable as death itself.

The sculpture was exhibited in Paris in 1898, where it received a bronze medal in the Autumn Art Salon, which was awarded to it by the French Academy of Arts.

Parisians, true connoisseurs of the arts, were struck by the realism and philosophy of the theme of life and death. Some whispered “How beautiful this horror.” Roden once said Golubkina that sculpture does not need originality, but it is necessary to express life.

The sculpture looks quite lively, albeit very old. A naked woman sits with her knees almost to her chin, even somehow shyly, embarrassed by her defenseless nudity. As if she is breathing all, her whole figure expresses chastity, despite the years that have passed. Life swept, but did not violate the purity of the soul and body. The figure of a woman simple in execution and in the prostate of the expression of this chastity causes genuine sympathy for her restless solitude, helplessness, some incredibly pure and defenseless decrepitude.

The sculptor in this statuette expressed her vision, her understanding of such an old age: old age is not the destruction of life, even if the body collapses, but preparation for the final transition. Old age as a natural, as a natural summing up of the entire human life.

The woman closed her eyes, remembering the past years, thought, deeply withdrawn into herself. Her busy arms, shoulders, bent under the weight of past years, say a lot. And it seems that all the wrinkles on the body and on the face are about to be smoothed out, the wheel of life and death will turn and the old woman will once again become a baby, just about ready to be born again into this world.