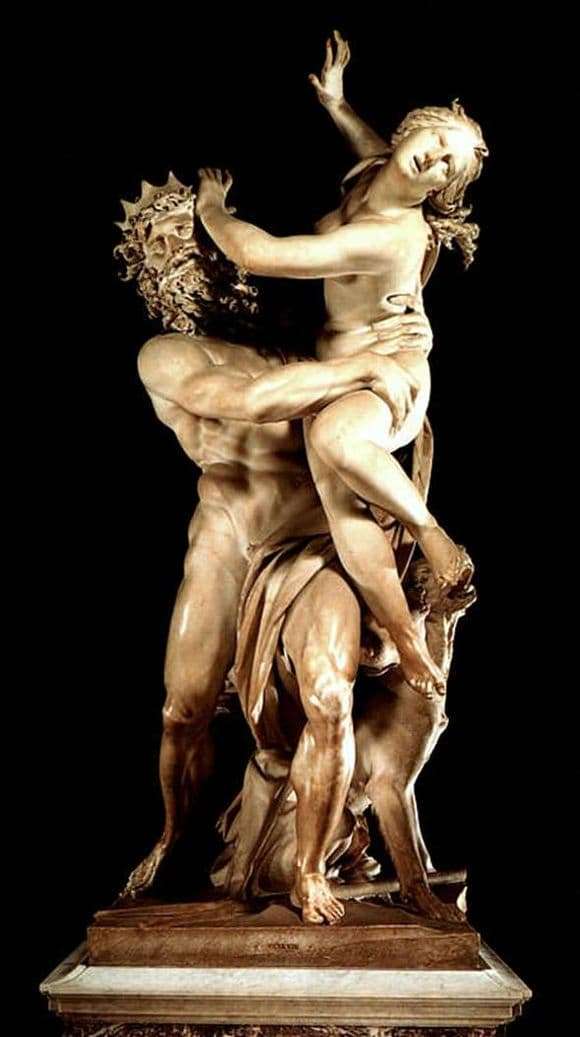 Giovanni Bernini at a young age created his work “The Abduction of Proserpina”. The sculpture was made very refined and with great virtuosity. The work of the author has incorporated the features of Michelangelo’s technique and antique plasticity.

The style of the seventeenth century contemporaries is also viewed there. At this time, Bernini was already considered an excellent architect and sculptor. He literally fulfilled one of the orders of the Pope.

The basis of the composition is the story of one legend. Proserpina is the daughter of the goddess Demeter and Zeus. The father gave his daughter in marriage to his brother Pluto, who ruled in the realm of the dead. And, having seen the girl with girlfriends, he decided to kidnap her. This is the moment that the sculptor depicted in his composition.

Bernini himself said that the marble in his hands became plastic like wax, so all his plans were successful. If you look at the sculpture, you understand that the author is right. Proserpine is depicted as a miniature compared with Pluto. But if you look closely, everything has certain proportions, you can feel the proportionality in all the details.

Bernini portrayed the hands of Pluto beautiful and strong, but he very carefully in them holds his beloved. The hero’s body is fashioned perfectly, every fold, muscle, everything is like in the picture. You can not say that he is sculpted from marble.

On the face of Pluto is clearly visible power and a little surprise. But he smiles a little. But Proserpina is not inferior to him in power and beauty. Pluto is not difficult to hold in the hands of the most beautiful girl.

The curls on the hair and the beard of the sculptures are masterfully executed. All the folds on the body are very similar to the natural ones. Proserpina’s genuine resistance is traced in all her movements. Tears froze on her face, despair can be seen in her eyes. But her strong hands will not let go anywhere.