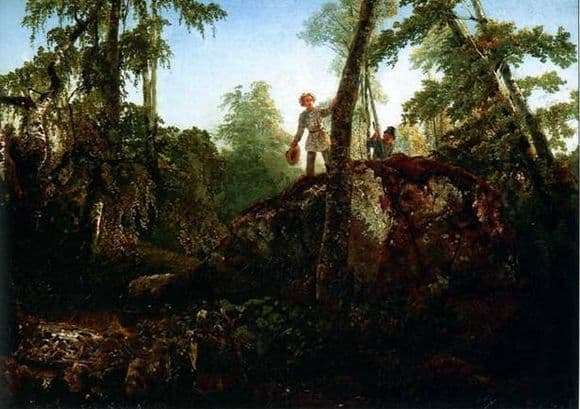 “The stone in the forest at the spill” is an early work by AK Savrasov. Despite the lack of experience, the picture is recognizable, the artist already in the early works used his individual style. The picture is bright and catchy. The canvas depicts a huge stone, very unusual and rare large size. Such a boulder is a real peak for young pathfinders.

Two boys stand on it, it is clear that they are tired of climbing a boulder, one boy does not let go of the branch, he is afraid of falling. Guys feel like conquerors of peaks, not every adult dares to climb to such a height. Such an act will remain forever in the memory. For the artist, this was also a kind of peak of his creative path. Boulder symbolizes the first victory, he conquered the first height. Suppose she is under the power of ordinary village boys, but she gave up, obeyed. Such a victory brings inspiration and confidence. The stone is overgrown with moss, which speaks of its longevity.

Perhaps it symbolizes the old problems that a person cannot overcome. The picture gives hope, shows that nothing is impossible. The artist reports that the main thing in life is the victory over himself, his complexes and fears. The motley colors give the image a reality. The forest plays in different shades, it is not just the background for the main character of the stone, he embraces a boulder. The huge peak has long been part of the forest. Below, the artist used darker tones, which indicates the density of the forest. Apparently the boys wandered into the wilderness, where rarely goes. This is a real adventure for the guys.

The boy on the stone boldly took off his hat and holds it in his hand, he wants to feel the spirit of freedom and feel the height. The wind develops his hair, which further indicates the greatness of the boulder. The clear sky speaks of a good day and gives a warm mood to the picture, there is a victory over a huge stone.