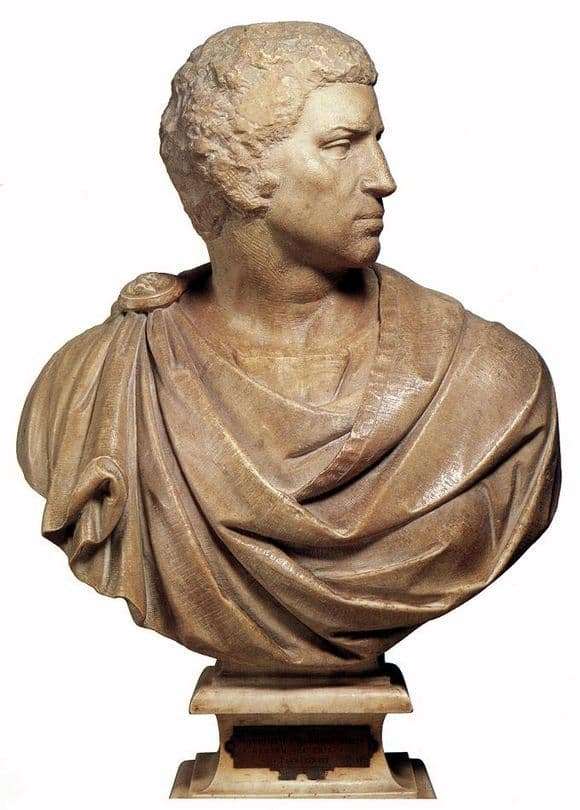 Brutus remained in history as the murderer of Caesar, who trusted him and never wrote to the traitors. According to legend, dying, he slid to the ground with a wheeze “And you, Brutus!”, Which became a common expression, and now, many years later, almost a joke. At the time of Michelangelo, when the Renaissance in many respects imitated the art of Ancient Rome, Brutus and his history were taken much more seriously. Moreover, Brutus’s deed was considered a struggle against tyranny, and was commissioned by Michelangelo by a man who genuinely admired it. However, times were such that such moods were not encouraged.

At a certain stage of the work, although the Brut was not yet finished, the masters persuaded to stop, because, once completed, the work could be dangerous for him. He could be considered unreliable, a man of wrong views, and it was always dangerous. Brutus is depicted in a toga held by a patterned fibula on the shoulder. He is curly, he has the right features for the Roman. Eagle nose, high and sharp cheekbones, narrow lips that look pursed. Eyes are blind, like any sculpture made of stone, and look blindly into emptiness. His whole face looks somewhat bewildered and arrogant at the same time, as if he does not like the strange times around him, and the fact that his betrayal became a talk of the town hall and managed to become both a drama and comedy and does insult at all.

One eyebrow is slightly higher than the other. The folds on the toga are so natural, as if this is a real fabric, not a stone. Brutus looks forward as if from time immemorial to the future, and his gaze is far from friendly. For the sake of such a future, was it worth the overthrow of the Roman Empire? It is unlikely that he himself knows the answer, but each of those who look at him,