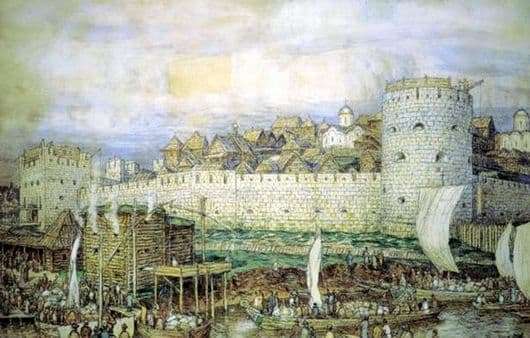 Probably there is no such person who would not hear a song about white-stone Moscow with golden domes. And probably many people have a question: what kind of white-stone is it when the Kremlin is built of red brick? Few people know that at one time the Kremlin was really a white-stone, and Moscow itself fully accommodated within the Kremlin.

It’s hard to imagine, but it is. There were no photographs at that time and there was no video camera, but historical documents were preserved, telling in detail how the white-stone Kremlin was built. These documents and took advantage of Vasnetsov. But here it is necessary to clarify – two artists Vasnetsov.

The author of this canvas is Appolinary Vasnetsov. He, like his brother, was fond of painting, but almost all of his works were devoted to historical subjects. Like, for example, this canvas. Thanks to him, we now have an idea of what the Kremlin looked like at Donskoy. Here you can see the golden domes of the temples behind the Kremlin wall. Here are just a little different towers, but rather – very different. And that Neglinka, which is now hidden in a pipe under the Alexander Garden, flowed very close to the walls of the Kremlin, and the current Moscow River itself was connected to it nearby.

We see that even then both rivers were navigable, and many people of all came to Moscow at that time. And given that Dmitry Donskoy often fought, defending the Russian lands, the people never fell off.

According to history, the Kremlin then suffered greatly from the invasions of Russian enemies and was almost completely destroyed. But it was soon decided to build a new Kremlin, and this time in the so familiar red version.