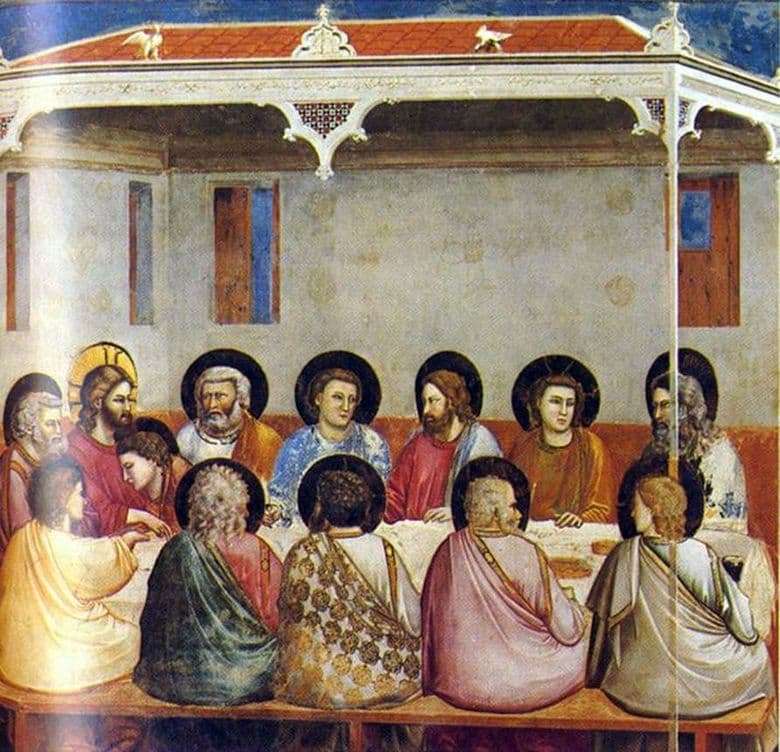 The picture was painted by the artist in the period from 1304 to 1305. Giotto depicts a special event in Christianity – the Eucharist (Communion), the moment of the establishment of the New Testament. Because of the threat from the High Priesthood, the meeting was secret. The Last Supper is described in all the sources of the Gospel. With high craftsmanship, Di Bondone conveyed the atmosphere of the evening and space. The artist in detail and very subtly traced the interior, canopy.

Participants in the Sacrament lead a leisurely conversation, sitting at the table. The apostles are depicted on both sides of the table, so that the composition becomes compact, there is an emotional relationship between the participants in the fraternal meal. There is neither food nor wine for communion on the table. Rhythmically complex, but at the same time quite balanced picture is written in warm tones of yellow-orange and purple. The picture

conveys an ideal ratio of proportions and subtle color gradation. The plot of the image is discreet, sophisticated, inherent in religious painting, which is one of the hallmarks of Di Bondone style.

The image of the Savior is observed on the left, unlike other paintings, where the artist depicts Christ in the center of the plot. Above the head of Jesus stands a nimbus of golden color.

Together with Jesus at the table are his disciples. Over their heads are depicted black haloes. Each character in the picture is endowed with individual traits.

Giotto clearly understands human anatomy, so each fold is realistically drawn. Realistically modeled forms, the volume of which is formed by lightening the main shade. Thus, with the help of light and shade, Giotto conveyed the illusion of a three-dimensional image. For brighter expressiveness, De Bondone applies brown shading around the eyes.