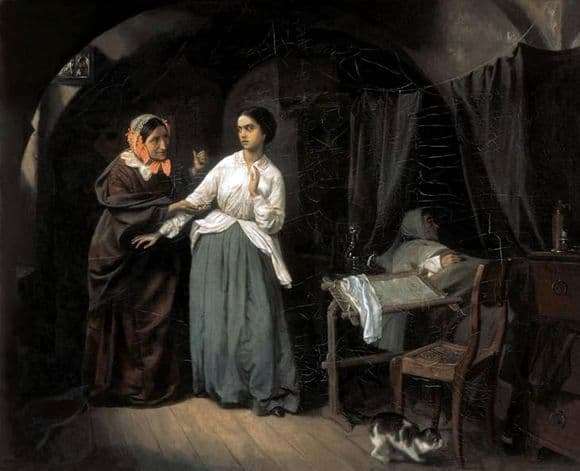 The “temptation”, as a story enclosed on a canvas, poses a complex moral question for the viewer.

The picture is a dark cramped room, poor furnishings, a single window. On the bed, covered with gray curtains, lies, turned away from the light, a dried-up old woman. Her face is covered with wrinkles, her hand covers her stomach, she has a scarf on her gray hair – and although it is a white day outside, she does not get out of bed. She is seriously ill.

Next to her bed is a table at which her daughter works. She is a seamstress, a white rag is thrown on the edge, which, perhaps, will be a wonderful dress for a rich woman. The girl herself stands in the middle of the room. She is dressed neatly but not richly, and in her hands a crafty-looking old woman shoves a sparkling precious bracelet. The old woman is dressed in a dark dress and a lace scarf. Her face expresses a desire to lure, tempt, get the required. Behind her, in the doorway, looms a man’s face – whiskered, with a bulging eye. What is happening is as clear as day.

The old woman invites the girl to spend the night with a man, offering her a bracelet. The girl is poor, she needs money to pay for the mother’s drugs and herself for food, her work is hard and she’s not making a lot of money. The bracelet and the money earned for it could save her, but the girl’s face is astonished and disliked. She recoils from the old woman, removes her with one thin hand, the second makes a disgusting gesture. Despite the poverty, she has the honor, and she is not going to sell it for a piece of metal, no matter how much it costs.

In the foreground of the picture – the simplest allegory that helps to better understand the meaning. A spotted gray-white cat, leaning against the floor, waits until a mouse appears from under the cupboard. The cat’s eyes are attentive, the back is arched, the tail is raised – the whole pose expresses tension.

So the crafty old woman wants to catch a girl and morally “eat” her.