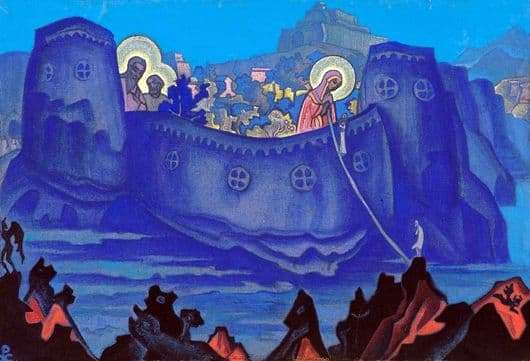 For many years nothing was heard about this picture. Art critics have already begun to think that this beautiful canvas is forever lost, but in 2013 the picture was at one of the London auctions. It turns out that for a long time the painting was at the disposal of a private American collector of painting.

In fact, there are 3 copies of this painting, written by the great artist Roerich. The artist created the first copy in 1931, and the painting made a very positive impression among art lovers. Therefore, Roerich decided to write a few more repetition paintings.

In his creation, the artist wanted to show in a completely new way the role of the Mother of the World in human destiny. Her image is completely collective and limitless. She is the greatest of mothers, helping people to find salvation from earthly sins. The plot of the canvas was made by the ancient legend that the Mother of God saved souls, helping them to go to heaven, bypassing the watch of the Apostle Peter.

At the central place of creation is the Queen of Heaven. It connects the world of earth and heaven. The earthly world is very small. In the picture he is depicted as a river with small boats. In the middle of the picture there are many saints, angels and other creatures living in heaven. The Mother of God folded her hands as in prayer, and from them to the earthly world a thin thread descends. The thread is lowered to people to help them save their souls. On the thread are two very small figures. This is a woman and a man receiving help from the Virgin. They are dressed in white, which symbolizes the purity of their aspirations.

The picture is dominated by blue and blue colors, which symbolizes the mind, intellect and spiritual purity. The light emanating from the clothes of the Mother of God and other saints is opposed to dark tons of hell and red flaming tongues.