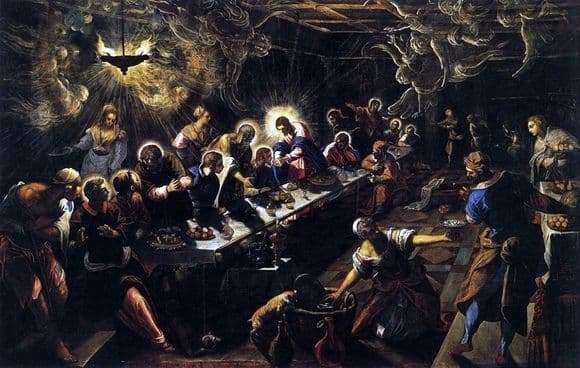 Tintoretto – a native of Venice, a representative of the school of the late Renaissance, which, however, is very conditional – for his work is characterized by a certain style created by him over the years. It is characterized by a masterful work with light, small details, and a delicate study of the faces. Extraordinarily talented, Tintoretto worked very quickly, especially if he was doing something to order, which sometimes made his paintings careless.

However, the “Last Supper” is not in any way. The picture shows the moment in which Christ breaks bread, saying, “This is my body.” Surprise is felt in a comfortable group of students, but not fear – they are used to the strange words of the teacher, they are not afraid of what he says, they just don’t really understand him.

They look at each other, afraid to take the bread, about which it was said so. And around them the usual poor tavern quietly continues life. The maids carry food, two visitors argue at the door, the owner says something to the cook, and everyone is busy with his own business. They are not interested in what is happening under their very nose. They do not see the angelic light, they do not see the thin glowing halos above the heads of the people sitting at the table. For them, it’s just an ordinary group of friends who came to celebrate Easter.

The cat climbs into the basket of fish, not knowing that the man who breaks bread is a god born by a woman. The dog gnaws a bone, not suspecting that he will have to rise once. The semi-dark tavern, which seems to be unlimited due to the twilight, contains a real miracle, but no one notices it. And the angels hover above the table unnoticed, and the light of the lamp under the ceiling seems to be all simple light, and not heavenly radiance.

Judas, sitting alone on the edge of the table, is not illuminated by this radiance, and is thus separated from the rest. He is already a traitor and is already thinking about his thirty silversmiths. “The Last Supper” shows that delicate moment, when a miracle occurs, remaining unnoticed for the time being.