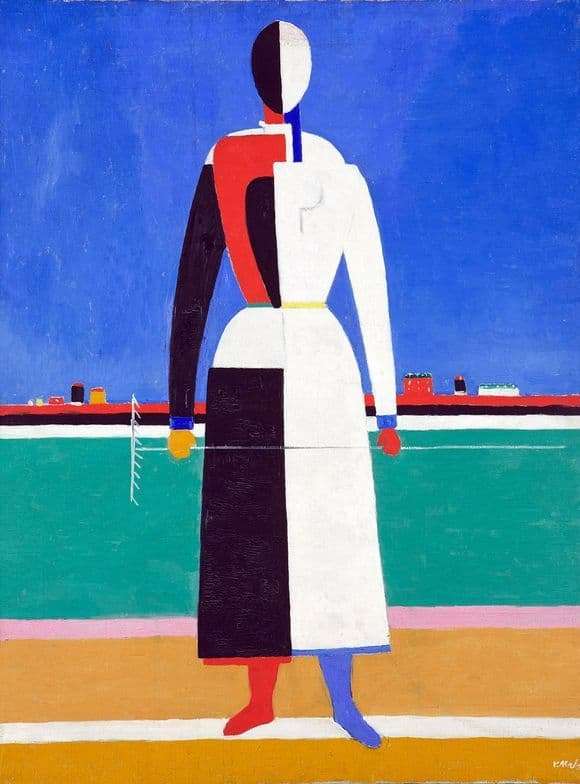 The Woman with the Rake is a picture from the second series of the peasant cycle of works by Kazimir Malevich. The artist began to create it in the years 1930-1931, after the first cycle was lost after the Berlin and Warsaw exhibitions in 1927.

New pictures in the second cycle solve other problems. The painting depicts a female figure, which is composed of geometric elements. The artist himself called the painting “Suprematism in the contour.” Due to the presence of geometric shapes, deciphering “Woman with a rake” is not easy. This is not the first work in which objectivity and reference to the peasant theme, which, at first glance, is not obvious, manifested. This suggests that, despite the evolution of Malevich’s work, the artist does not refuse the depiction of earthly life.

The main colors of the canvas are white, red and black. The female figure, like in other works by the artist, is devoid of a face: instead we see a black and white spot. The background consists of strips of colored fields and buildings, the shape of which resembles urban buildings. Here the artist departs from the former motives of his works, in which peasant huts were present. Kazimir Malevich tried to show the civilization that came to the village.

“Woman with a rake”, unlike the “Peasant’s Head” similar to her, is not a conflict. It does not carry the opposition of man and the world, and colors have a calm and smooth transition. But the main difference is that the picture “Woman with a rake” does not reflect the harmony of despair that Malevich endowed “The head of a peasant”.