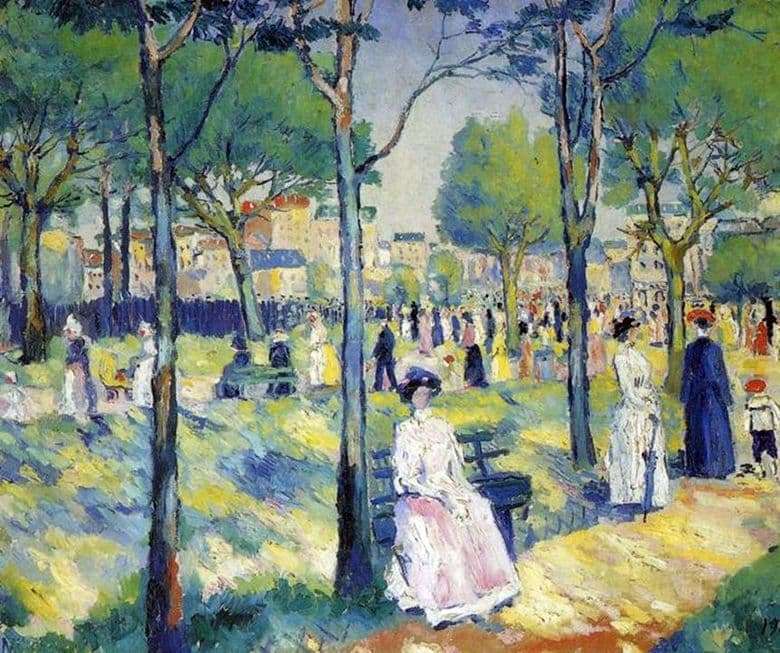 For Kazimir Malevich, the 1930s are characterized by his study of the theory of impressionism. It was during this period that he wrote works that resemble the Impressionists from France in their style. According to the artist, impressionism is considered the beginning and the basis of the painting of the new time.

During this period, the painter is engaged in writing several canvases devoted to the boulevard theme. Thanks to these his paintings, we see how he expressed his thoughts and feelings. “On the boulevard” is exactly that. All the works of Kazimir Malevich in earlier periods are well-written, even if the artist wrote it with a flourish, careless brushstroke. The author pursued a single, in his opinion, main goal – to convey a perspective space that moves away from the viewer.

The picture does not have the main characters. About this, we learn even from the very name of the picture. The face of the woman depicted in the middle plan has no clear boundaries, it is not spelled out. This is the image of a woman, typical of Malevich, a young girl who decided to sit down for a while and relax on a park bench on a warm summer day. Despite the fact that her clothes are written in a realistic manner, the viewer cannot feel her character, guess her mood. This is a kind of symbolic image that the artist used to make the compositional composition of the work.

The background depicts a landscape in the style of impressionism. We see beautiful trees that are painted with careless strokes of blue and yellow.

People who stroll unhurriedly along the boulevard are not clearly written, it is impossible to understand what their faces are, they do not have individuality. The artist managed to convey the human fuss.

“On the boulevard” is a symbolic picture, which was designed to convey all Malevich’s secret thoughts about whether there is a point in human existence or not.