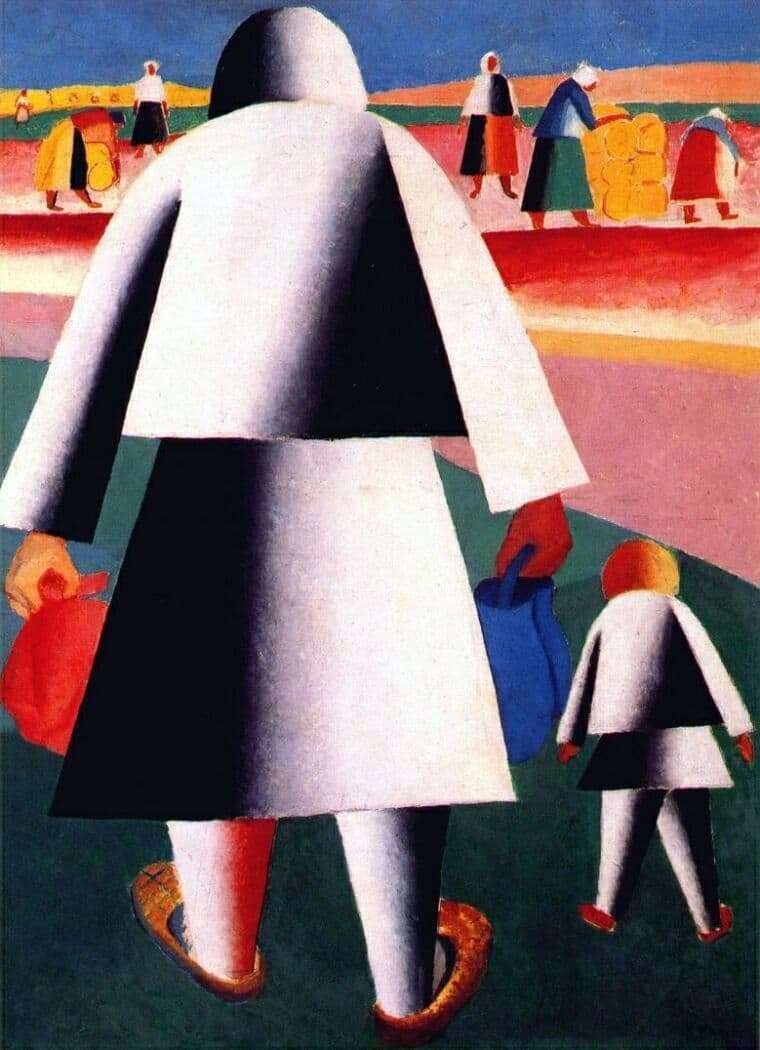 In the works of Soviet avant-garde artist Kazimir Malevich, human characters are not very frequent guests. But when the author still took on the image of people, as a rule, they were created from peculiar curved suprematic planes. This is a characteristic feature of the artistic direction of Suprematism, the founder of which was Malevich.

Before writing this work, the author creates a painting “Roly”. The boy in the picture “To the harvest” is an exact copy of “Vanka”, he is depicted with his back, his head is pulled into his shoulders. Despite the primitiveness of the forms, the artist managed to convey the movement – we clearly understand that the boy is moving forward, moving away from us. Female figure (Marfa) – performed in the same manner as the boy, only a headscarf was put on her head, and a bundle and bucket appeared in her hands.

In the background are people who harvest hay. Unlike monochromatic central characters, minor characters are painted with bright colors.

The painting belongs to Malevich’s second peasant cycle. Interestingly, in the first peasant cycle there was the work “In the Field”, which was later lost. Only a sketch of the work has been preserved, but in comparison, the differences between the two periods of the author’s creative work, the pre-supreme and the post-supreme, are clearly visible. In the original paintings of Malevich, the horizon did not exist as such, it was later clearly indicated. Also, in later works, the space acquires direction and perspective due to a clear division into sectors, as a rule, in color.

In his autobiography, the artist wrote that he was always fascinated by the topic of peasant labor. One way or another, but these works, very unusual for the average viewer, along with Black Square, have immortalized the work of Kazimir Malevich.