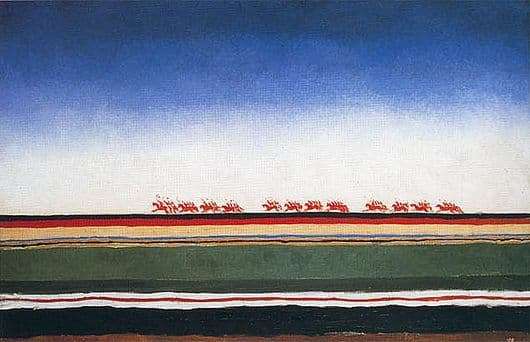 “Red cavalry gallops” – one of the most famous abstract works of Kazimir Malevich. The exact date of writing is unknown. Approximate dating – 1928-1932 years. Difficulties with dating arise from the fact that Malevich, in most of his later works, affixed early dates.

For many years, this was the only painting by Malevich, made in an abstract manner, recognized by official Soviet art critics. In many ways, this has contributed to the subject matter – on it the artist depicted events related to the October Revolution. The picture was even set date – 1918. However, the picture was created at least ten years later.

The picture is clearly divided into three equivalent parts. This is the land, galloping red horsemen and the sky. In this work, Malevich conveyed the so-called golden section as accurately as possible. The earth and the sky share a clear horizon line, sharing the picture in an ideal proportion of 0.618 (earth: sky = sky: picture = 0.618). At the time of writing the picture such accuracy was very rare, because a number of critics used the canvas as an example to follow.

Cavalry – these are three separate groups, each of which has four separate riders. At the same time, in view of the fact that each rider is “calculated,” an illusion of four rows is created.

The lower part of the canvas is a sectional land transmitted by twelve colors, which corresponds to twelve red horsemen.

The center of the picture is shifted to the right and down. The space in front of the horsemen is twice the space left behind. Thus, Malevich transmits the movement forward and upward, to the prospects of an open revolution.

The “Red Cavalry” is simultaneously a philosophical and mathematically verified picture. The images that are depicted on it are understandable to every viewer who has looked more closely at the canvas.