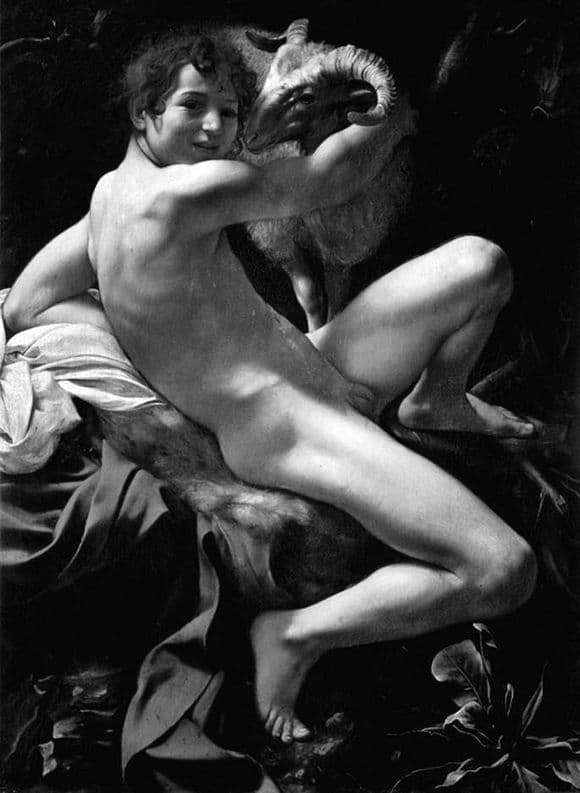 Caravaggio – Italian Renaissance artist, one of the greatest masters of Baroque. Like most fans of this style preferred the abundance of details asceticism, and the brightness and richness of colors of pallor. Of all the themes, the most loved were mythical and religious motifs.

His “John the Baptist” is a picture, which is also called “The Young Man with a Ram”, because the usual image of the prophet is interpreted unusually. As a rule, John is portrayed at the dawn of his glory, when he baptized people on the Jordan River. Or when he walked in the wilderness, ragged and consumed by inner silence.

In the picture, Caravaggio is not an adult man, not a prophet, but the boy who this prophet once was. He has curly hair, a simple, open face, dark eyes. Nude, he sits on a stone, barely covered with a piece of camel’s skin and his own clothes, and hugs the ram’s neck, looking slyly at the viewer. There is no strain or suffering in it. He is not yet the man who left all that he had to preach the coming of the one who will baptize with fire.

It does not have a belt, the usual robe, of all the attributes of the prophet – camel skin, and the ram to the prophet does not fit completely, because in most interpretations it means lust. John, as a rule, is depicted with a lamb, that is, with a small lamb.

Perhaps such an approach might offend those who only want to see holiness. But the very reminder that any holiness originally comes from dirt, is born in the dirt, it grows in the human world – it is valuable. So Christ went to preach only when he was thirty-three. But, forgetting this, he and John and the saints are portrayed at once as adults, as if there was no long way from an ordinary child, as if they never had anything but a divine understanding.