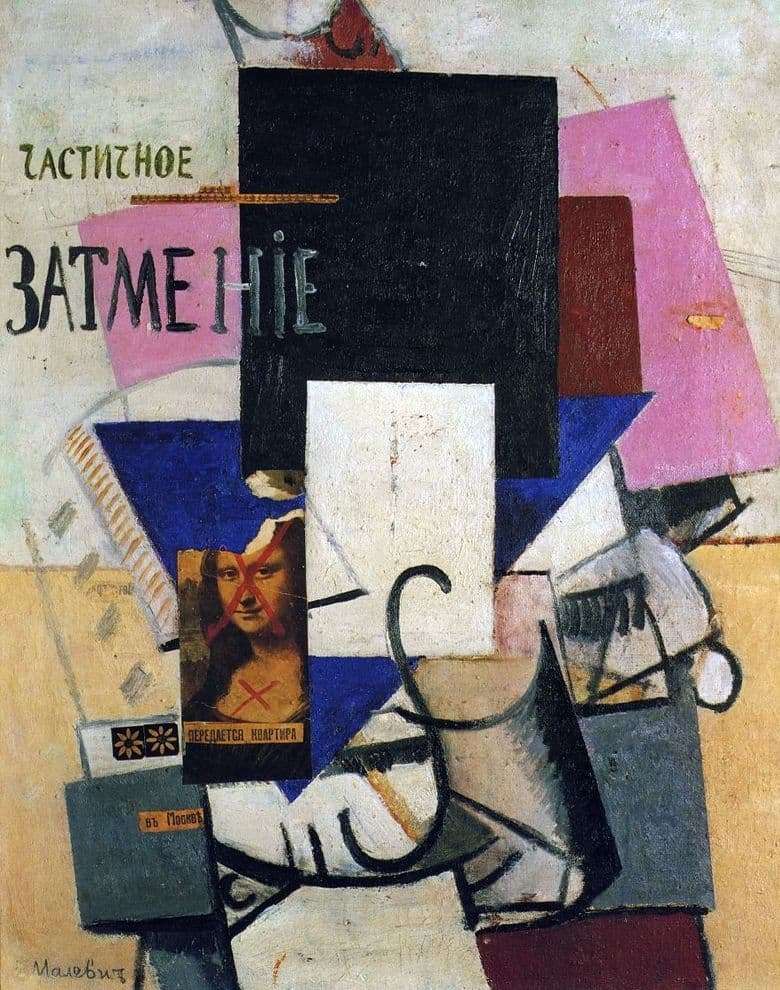 The painter tried to create Suprematism from several similar works. One of the proofs of this is his famous painting “Composition with Gioconda”. Here we see a white space that looks more like a plane that has an incomprehensible depth, some geometric shapes that have regular features and bases, as well as a local color. It is rather difficult to track the connection with any subject or even to whether there is reality or not.

Here, all the figures seem to enter into some kind of incomprehensible and special relationship with each other and with the white background around them. The most interesting thing is that geometric figures can overshadow the images that go under them. In “Compositions with Gioconda” there are two very important phrases that come to the fore. These are phrases that Malevich uses in his illogical works. The newspaper clipping, in which we see a fragment of the “flat is transmitted” and is supplemented with only one word – “in Moscow” (old spelling is used), as well as the mirror-turned word “Petrograd”.

All written phrases carry a semantic associativity, which manages to impart a certain artistic manifesto to the work “Compositions with Jockonda”. Malevich believed that associations such as an apartment, a house, or a sink were symbols that pure art should use. It is art that builds its own world, it is innocent. In the world of art, each idea can find an apartment, but Malevich believed that a tree hollow should not always be used to build a nest with birds.

Ironically, the meaning of “transferred flat”, which the artist placed directly under the portrait of Gioconda, which someone seemed to have crossed out. The portrait looks like it was cut from a postcard. There is a version that in the original version, Malevich attached a cigarette butt to the mouth of Dzhokonda. Unfortunately, this version of the work did not reach us.