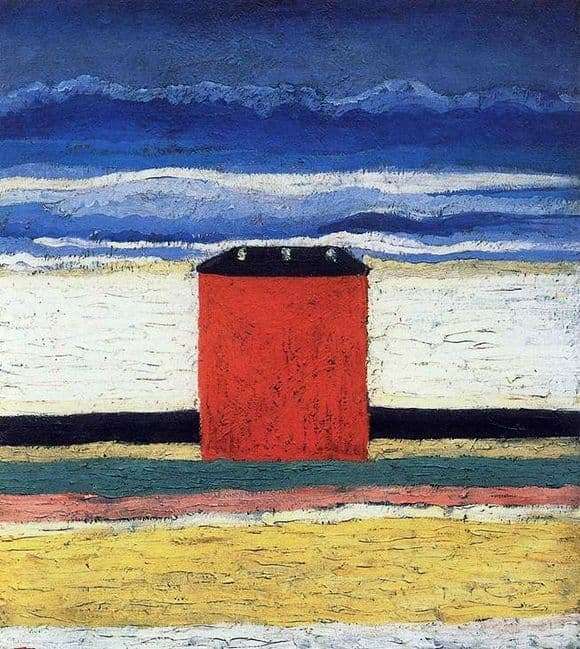 For some reason, Kazimir Malevich decided to isolate the house into a separate whole picture. The goals are not very clear, but the artist knows better. Exactly the same house already met in the paintings of Casimir, such as “Complicated Premonition” and “Running Man.” Only in these pictures is the house in the background, in a reduced form. Here he is the central “character.”

The usual rectangle is bright red, implying, apparently, a brick covered with a black trapezoid-roof. But, pay attention, how this roof looks like a coffin lid, the windows have just been painted on! Of course, this is not just.

Not a soul around, fields, horizon, space are lifeless, almost dead. And in the midst of this desolation there is a red (blood color) house, covered with a black (the color of death, mourning) “coffin lid”. Isn’t this a symbol of human values ​​that have been corked for ever, immured positive emotions, concreted feelings?!

Or maybe this building is a terrible and bloody State Security Committee? No matter what, at Moscow Lubyanka or at Leningrad Foundry, or some other, it is important that this house is a symbol of endless anguish and torment, abandonment and loneliness, of God – and misanthropy…

And when you decipher this picture from precisely this point of view, Malevich’s release of this image of fear and death into a separate picture becomes understandable and justified. After all, the artist himself has repeatedly been in this institution. Although he was lucky more than many others: he was released after some time.

But, according to the testimony of citizens who have been there, even the walls groan, and consequently, even a short stay there was enough for the avant-garde artist to spill all his fear and all his hatred on the canvas that we see (and not only ).