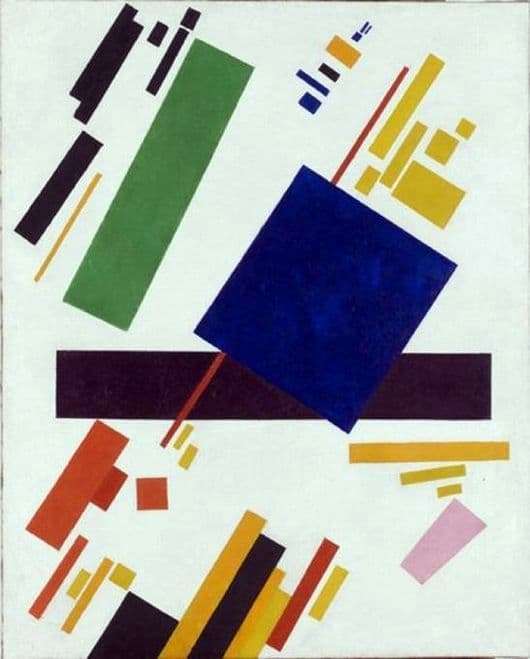 This picture is a blue rectangle, located on top of the red color of the beam. The composition was written by Malevich in 1916. This is one of the rarest and most expensive works in the history of Russian art. Thanks to his paintings, Malevich had a powerful influence on the ideology of art throughout the world. The rectangles in the picture are dynamic and bright, and in the middle of the composition there is a small blue square. This picture is written in the interval between the Black Square and the White Suprematism. Suprematism was founded by Malevich himself, by which the artist defined abstract compositions.

The word suprematism means a certain superiority and domination. Suprematism is to ignore the reality of the image. This is a protest against all naturalism in painting and art. I. e, the composition is reduced to several simple figures that have their symbolic meaning. Geometrical images as if immersed in the space of the white abyss, and dominate it over the laws of statics and dynamics. Suprematism emphasizes the role of the geometric figures themselves, putting their colors in the background. Subsequently, Malevich’s Suprematism began to manifest itself in architectural art. So, geometric images of deep content began to appear not only on the canvases, but also on the dishes, walls of various buildings. As we see, the Suprematic composition is not as simple as it seems at first glance.

The master laid down his concept and meaning in creating this picture. And, looking at her, everyone can see the peculiar nature of the great artist. Some will see his inner essence, the depth of his rich world of imagination. Others maybe Pay attention to the fact that the simplest things in our lives may acquire greater value. It all depends on how we look at everything.