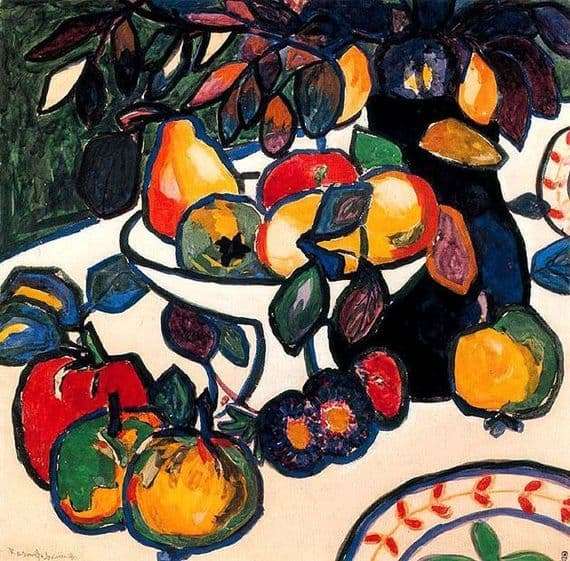 Malevich is a famous Russian impressionist, the most famous painting of which “Black Square” still causes controversy and bewilderment – some see in it a deep deep meaning, others argue with them, speaking of the picture as a meaningless daub.

However, before coming to the “Black Square”, symbolizing the end of everything, Malevich spent a long time looking for himself and his style, trying a variety of options. Realism disliked him, classicism seemed boring. He considered senseless to carry life into art, saying that, on the contrary, it should be carried into art, for this is the only way to make it truly beautiful.

Therefore, in his quest he turned to impressionism and cubism, but never to realism. He was close to bright colors, strong, harsh emotions, and were not at all near pastoral, tenderness and trembling. He wanted to change his life and wanted to do it through their art.

“Still Life” – one of the works of the search period. It is made close to the cloisonne technique – this is the French style of painting, in which large, often homogeneous spots of color are closed with black bold lines.

The centerpiece of the composition is a white vase – it was borrowed from a popular artist at the time, to whom the rest equaled – to which it was fashionable to equal. However, there is no uniformity in the picture, as if the artist could not achieve peace with himself. Some fruits are written out lovingly and even with a bias towards realism – others are simply contours filled with color.

The vase is devoid of shadows, as are the flat plates, painted as if the child was working with them – but at the same time the apples are bulging, voluminous, with highlights, though somewhat exaggerated. As if the artist never decided what and in what style he would write today.

However, in spite of this, the still life is distinguished by the bright saturated colors characteristic of Malevich and his fierce energy.