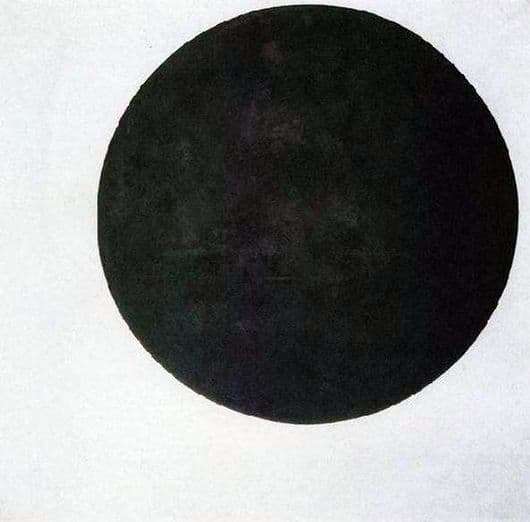 The painting was created by Malevich in 1923. We see just a big black circle, which is depicted on a square in white. Composition, at first glance, the most primitive. But it has a deep, almost philosophical meaning. The value of this work is incredibly great, not only for understanding the meaning of Malevich’s work, but also for the entire painting of his contemporary era. Kazimir Malevich was constantly attracted by the amazing and infinitely complex magic of the three main forms – the square, the cross and the circle. If the idea of ​​a genius about the initial element of all being is conveyed in the Black Square, then the artist’s world is further developed in the Black Circle. In this creation, all the static of a square acquires a certain dynamics.

The cross, the square and the circle of the artist Malevich are the three main whales on which he based the Suprematism of his work. It was these first figures that acquired a truly programmatic meaning and formed the basis of the entire plastic system created by the artist. “Black Circle” is a sample of pointless painting, which Kazimir Malevich himself called suprematism (another realism in painting). For the artist, this visible irrelevance is a conclusion from the entire existing world of objects, a completely new aspect, which revealed not only the breadth of space, but also the entire Universe.

The forms created by Malevich are in some kind of a stateless state, they fly, as it were, without relying on anything. The black circle is an incredibly important module of the system of plastic character, a great potential of the style-forming character of an absolutely new idea, which Malevich called Suprematism. It is from the original “Black Circle” that Malevich creates his brilliant creation “Black Square”,