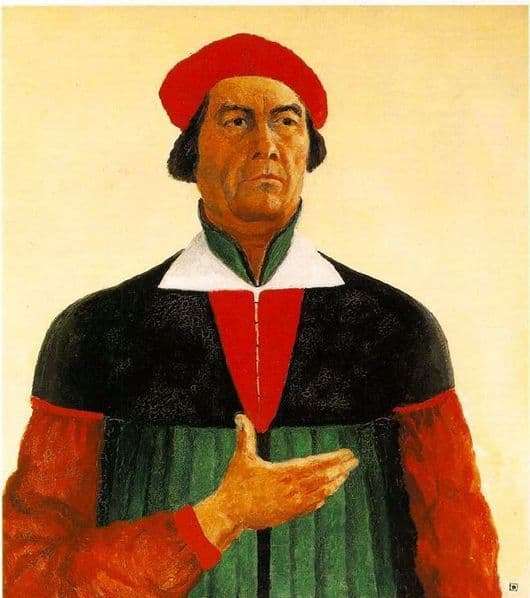 The theme of the self-portrait was used by K. Malevich throughout his entire creative activity. Picturesque images of himself constitute a kind of chronicle of life, and in each image the artist appears from a new perspective. Features of each painting, including style, technique and attributes, help to represent the emotional state in which the author was at the time of writing each of the self-portraits. Currently, art critics are aware of the five canonical self-portraits of Malevich. Of these, the earliest dates from 1907, and the last in 1934.

The most unusual of Malevich’s self-portraits was created in 1933, shortly before the death of the great avant-garde artist. This picture is a peculiar manifesto of the outgoing creator, but leaving this world without a broken serious illness and repression of the totalitarian government, but on the contrary, with his head held high and up to the end defending his natural right to freedom of creativity.

Indestructible fortitude is expressed in self-portrait through a proud head landing, a powerfully written face and a look filled with solemn earnestness in which the words that are not spoken are read. The Venetian costume, in which the artist is depicted, is a reference simultaneously to the Renaissance and the period of the Reformation, thus emphasizing the innovative, revolutionary character of Malevich’s work.

The artist’s gesture in the picture is remarkable: most critics agree that Malevich holds an imaginary “black square” in his hand, thus symbolizing the hope that his future generations will understand their work. A miniature black square is placed in the lower right corner of the picture in such a way – where the author’s signature is usually put. This artist emphasizes faith in their creative rightness.