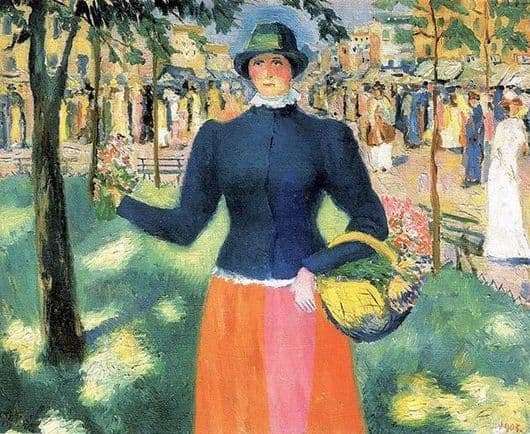 This picture in many ways is a unique work of art – primarily due to the fact that it gives us, who are familiar mainly with the artist’s Suprematist experience (such as “Square” and “Athletes”), an idea of ​​a different Malevich.

At the end of the 20s, the artist, engaged in the reconstruction of his creative path, unexpectedly turned to techniques that had already become history, impressionism, fauvism and neo-primitivism.

At the same time, Malevich purposefully dated pictures of those years at the beginning of the twentieth century. Until some time, “The Flower Girl” was considered perhaps the earliest canvas of the artist, but one close look, thrown at this picture, dispel any doubts about the true time of its creation.

First, the “Flower Girl”, in which the influence of Malevich’s neo-primitivist experiments is clearly felt, does not fit into what we used to call “Russian impressionism of the beginning of the ages.” Secondly, the contrast between the figure of the flower girl, associated with the epoch of the 1920s, and the passers-by surrounding her, who looked more appropriately on the canvas of the 80s, is striking.

These features, however, do not negate the artistic merit of the painting. The appearance of the flower girl, her hat, a basket in her hands is very realistic. At the same time, several surreal features slip in it, which are concentrated in the tense figure of heroin, which is emphasized by the bold color combination – blue and bright orange. It is also worth noting the diverse, complex composition of the picture.

So, behind the flower girls are high-rises, almost merging with the sky, and quite well traced characters of the second plan, and the street. All this makes the researchers of Malevich creativity again and again refer to this canvas as a curious example of the late works of the artist.