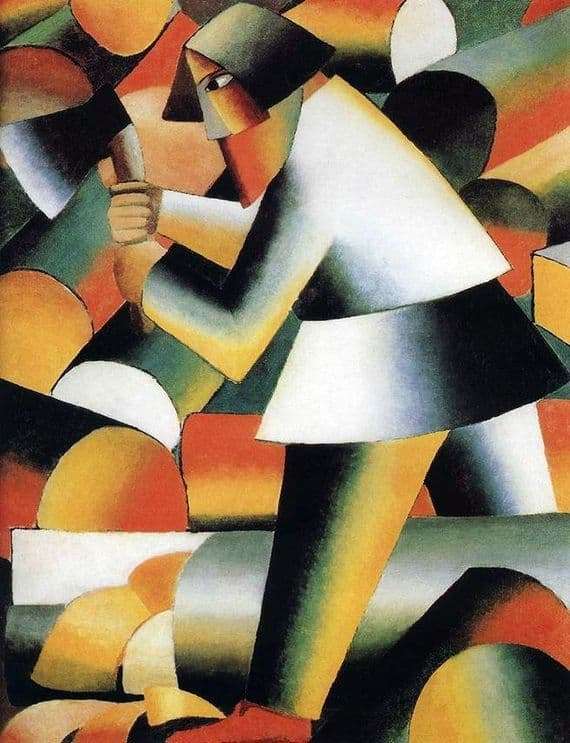 The well-known work of the talented artist Kazimir Malevich “The Woodcutter” was created by him during the years 1912-1913. The painter preferred oil as paints. He called this picture “The Imitation of the Icon”, meaning by this its similarity to the Etudes of fresco painting. However, the golden color preference was fairly straightforward, coarse and not particularly convincing in icon painting, so Malevich himself called this genre of paintings “labor”. Malevich always had his own unique look at the writing of icons. He attributed the icons to the highest level of art of the peasants.

At the same time, his opinion has its share of truth, since icons are actually the only kind of images that an ordinary person encountered, and more than one house did not remain without an icon. In his works from the peasant labor series, Malevich discovered a new direction of his own style. The image of the peasants for their usual daily business occupy the entire composition of the picture. Malevich simplifies all the details of the picture to a primitive children’s level. All parts have a very enlarged shape and deformation to give them a greater degree of expressiveness. The gamut of colors is combined with the style of the icon of the writing, and the plane of the work is made in a proper form.

The very image of the peasant, his everyday life, his work is exalted and occupy the center of the composition. It is as if his peasants are made of new metal material, assembled from separate parts and parts. However, Malevich very concretely depicts the gender of a character in his works: female or male. Rough features, strong and strong bodies are most often depicted in profile. At the same time, the gloomy features of church icons are reflected in the peasant images. Also, all the characters of Malevich had one thing in common – large eyes.