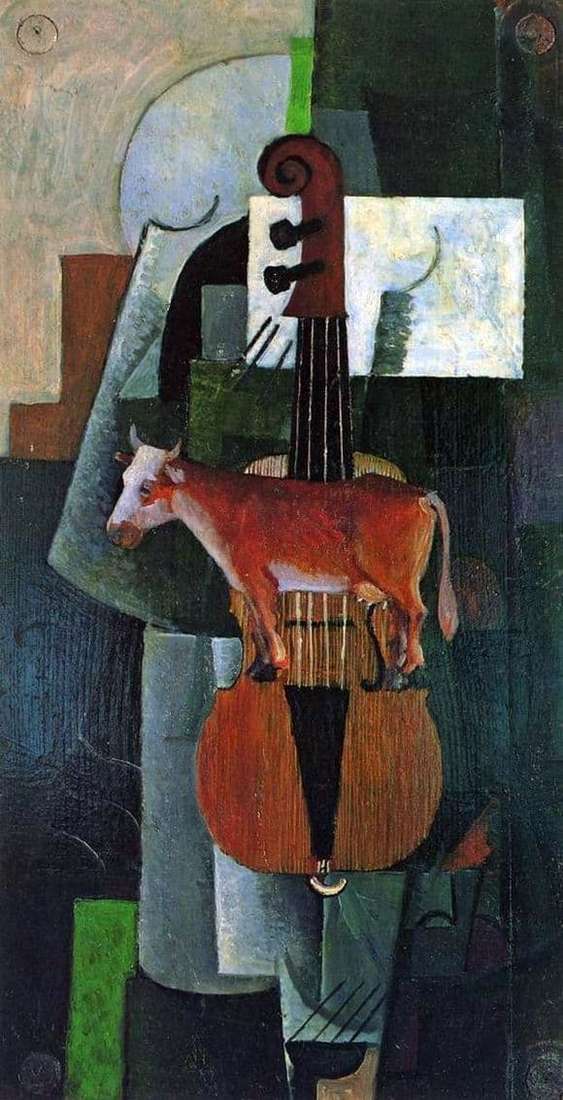 KSMalevich is a bright representative of surrealism, so undeveloped in Russia at that time. His paintings are striking in their originality, the characters are incompatible, and the colors are sometimes in their gloom.

The work “The Cow and the Violin” is one of the most vivid and unusual paintings. Painted picture on a wooden plank. At that time, the artist was in need and could not afford to buy an expensive canvas. Then he used as a canvas part of a wooden shelf, on which even holes remained for fastening.

The work is done in the colors characteristic of the painter. The dark background speaks of the artist’s sadness, his gloomy mood. The idea of ​​the work was the standards on which the art of that time was based. Music had to be created according to the rules, the literature must comply with certain standards and the painting was evaluated on the basis of the specified parameters of the

The artist promoted freedom in everything; he easily combined unlike objects. Malevich opposed the standards and rules, he believed that for art there are no laws and formulas. In his picture, he ridiculed the use of clichés.

Master jokingly offers to combine the cow and music, visually demonstrating how it will look literally. Several green elements in the picture gives optimism not only to the work, but also shows the artist’s hope for development and the desire to live. He did not tolerate certainty in art and its clear separation. It cannot be said that the picture was made in the style of cubism. This work is probably one of the most realistic in Malevich’s creative life.

The picture is filled with deep philosophical meaning. The artist allows you to look from the outside not only at the standards, but also at your world view. Perhaps this painting will change the view not only on art, but also on life. In each work of Malevich, everyone sees his own hidden meaning.