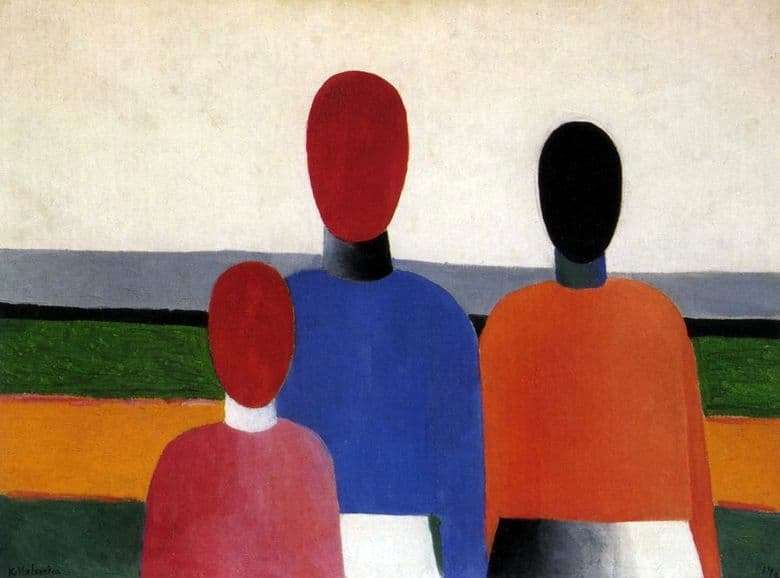 Looking at this picture, we again return to that period of the creation of the artist Malevich, where he used his favorite technique – faceless people. What do we see looking at this piece? The artist again decided to portray the impersonal human figures that stand against the background of colored stripes, most likely the entire field. Here Kazimir Malevich is trying to establish his worldview, he is trying to convey his thoughts and feelings to the viewer.

People on the canvas are depicted the same. The only differences between them and the neighboring figure are their robes – the way they are dressed. Two oval faces, which serve as head figures, the painter decided to paint in one color – reddish. One oval-head, in the opinion of the painter, should be painted exclusively in a dark, gloomy color.

The work clearly reads the horizon line, the perspective is sustained. Malevich decided not to change himself and decided to write the sky with a paint of a snow-white color.

During this period, thanks to his paintings, the stage begins when other artists began to enter a new space, which today has received a completely different name – design.

An artist with a simple geometric figure, on a common background, wanted to show a certain apocalypse, which hangs over all of humanity, as if calling for a future to be built. Casimir did not hesitate to conduct experiments, he was engaged not only in paintings, but also engaged in the design of architectural forms, he was interested in applied art.