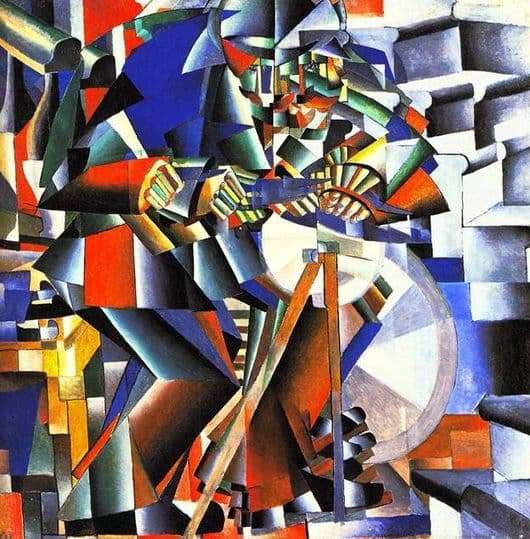 This picture has an addition to the title – “The principle of flickering.” What is it? Apparently, in that in different positions, the word in the stroboscopic photograph shows a foot pushing the pedal of the grinding machine. The movement of the grinder’s hands is shown in the same way.

One of them brings the knife to the machine, the other presses the blade to the grinding wheel. And if the outline of the shoulder can be guessed, then it is simply impossible to understand where the head of the working person is, what his face is. Guessing only thick red mustache. Evidently, Kazimir Malevich wanted to show the turn of the master’s head.

Critics attribute this picture to a style that combines futurism and cubism, calling it futurokubizm. The principle borrowed from cubism is a multiple repetition, if not called it a heap of homogeneous objects. On the right we see something like steps. On

the left – some rails and bottlenecks, with a closer look, they suddenly turn into ordinary railings with balusters. Behind the figure of the grinder it is possible to make out the yellow table. Near the railing – white pot.

The only thing that is shown without repetitions and broken lines is the wheel and the grinding wheel. They did that, with the help of some techniques, the artist gave the movement.

Of course, one can argue about such art for a long time, however it’s impossible to disagree with the fact that this picture carries a certain mood, and it is very positive. This picture is inspiring, she is beautiful. It has the main thing that distinguishes a masterpiece – emotions and movement.

In the present creation there must be an action, compressed in an instant. And this was Malevich managed to embody in his film “Grinder (the principle of flickering)”. And don’t the sparks of hot metal flash like that when the dull knife is in the master’s hands? Doesn’t the untwisted wheel flash like that?