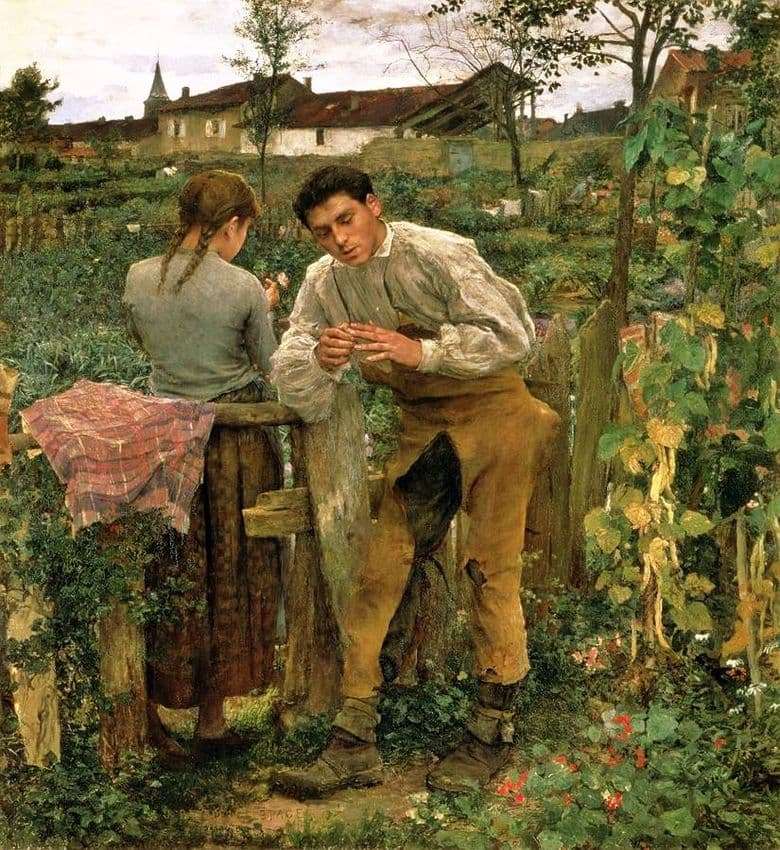 French artist Jules Bastien-Lepage – the brightest representative of naturalism. Being himself a native of the Lothing peasants, most often in his paintings depicted a village life. In his youth, Bastien-Lepage went through the German-French war and returned home with a severe wound. Despite the disease that consumed him (the artist died of cancer at the age of 36), he traveled a lot, including visiting England and Algeria. These trips gave new insights to his work. Despite the short term allotted to him, the artist had a great influence on European painting, and on many Russian artists as well. V. Serov admitted that he goes to the Tretyakov Gallery every Sunday to watch the “Village Love” exhibited there.

Bastien-Lepage worked a lot on nature. Even his portrait work is most often performed in the open air – the artist believed that this way the faces are more natural, the skin tones – more alive. He skillfully and subtly conveyed the features and shades of the sky at different times of the year, the play of colors of foliage and grass, and the earth texture.

Many paintings by the author depict peasant labor – but even in hard work the artist finds a kind of poetics. Being partly specifically academic, Bastien-Lepage’s paintings, nevertheless, brought a fresh stream into the atmosphere of the Parisian Art Salon. In most cases, the artist combined landscape and portrait on one canvas, giving them romantic and even sentimental features; the pure and natural colors that the artist loved made many of his works look like photographs or copies from photographs.

Painting “Country Love” – one of the most successful works of the author. The painting depicts a couple in love – a boy and a girl. Land plots belonging to their families appear to be located nearby, being separated by a wooden fence. It was from this old fence that the lovers met, and are now chatting nicely, embarrassed and delighted by this most likely not quite random encounter. The guy, dropping his eyes, timidly looks for a topic for conversation; the girl shyly pulls the flower presented to them. Her thin pigtails, slightly stooped back, covered with a gray blouse, a long brown skirt, neat little shoes – everything is incredibly decent and cute.

Apparently, she just took off her handkerchief and hung it on the hedge to make her chosen one more beautiful. The young man shyly considers his hands; he is wearing artisan clothes, his pants are protected by a special apron. He leaned slightly to be the same height as the girl. An idyllic picture of nature completes the scene. The dark silhouette of the church in the distance, lovingly written out peasant buildings, bright orange nasturtium flowers, bent over the feet of lovers. Dim and pleasant color of the work creates a feeling of deep sincere feelings.