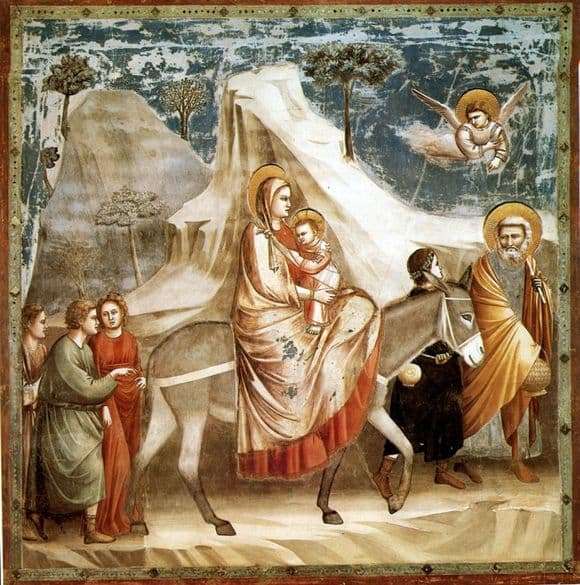 The artist Giotto in his work talks about an event that relates to the infancy of Jesus Christ. An angel appeared to his father Joseph outside and informed the will of God about the flight of the holy family to Egypt.

At that time Herod, the evil and cunning king, ruled. He learned that the King of the whole world was born and decided to kill him, but he didn’t know exactly who this baby was like to get him. Herod, fearing for his power, ordered the destruction of all babies under the age of two years. This plot is of great importance for the church.

The picture is called “Flight”, but it is least of all similar to flight, in the sense of movement, we see an important procession, which is important, slowly marching through the desert. The procession is important, without haste, it is clear that the King of the world is marching. Giotto very importantly described not only people, but also animals. The painting is a composition reminiscent of a deity.

The base of the pyramid is the donkey, and the top is the Mother of God and Jesus Christ. The donkey shows the humility with which Jesus Christ appeared in the world. He did not come as the Great Lord, but as a defenseless baby who is forced to flee from death, seeking refuge in the far side, parading on the most humble animal.

The Virgin and the Baby ride a donkey, led by Joseph – these are the main characters in the picture. This is one of the main biblical scenes. Giotto depicted in his picture of three young men, youths and one woman. The youths are the children of Joseph from the first marriage, and the woman is the maid, the helper to the Virgin Mary on the way.

There are several trees in the distance, they are the heralds of victory, accompanying the holy family along the way. Also in the way they are patronized by angels, in this figure one angel can be seen accompanying the Virgin Mary with the baby, opening the way for salvation. The angel sanctifies the road and accompanies forth to life.