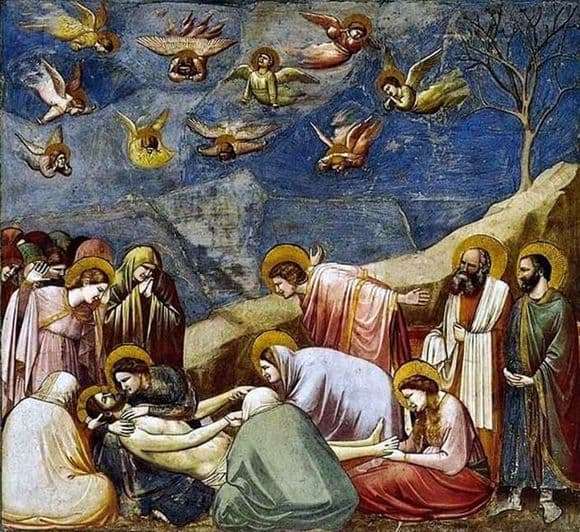 The frescoes of the Italian painter and architect Giotto marked by their birth the discovery of a completely different page in the narration of artistic history. Until the heyday of his work, sculptors of Italy followed the rules of the medieval and Roman ancient traditions of drawing.

Painting Giotto breaks the connection with the painting technique of the past, down to a complete refusal to follow its laws. Florentines believe that the illustrious master crossed the threshold into the newest era of art, in which they are undoubtedly right.

In the three-year period of the Early Renaissance, from 1302, the artist worked to enrich the interior of the chapel walls in Padua. His work turned out to be extremely productive – 38 religious scenes from the New Testament. Giotto’s famous panel is the central fresco “Lamentation of Christ.”

The image is focused on the reduced faces of the murdered Christ and the Mother. It is to this center of the greatest emotional tension that all objects and characters of the canvas are compositionally directed. The sloping surface of the rock as if by an arrow indicates the Holy Family. The views of the heavenly and earthly participants in the sorrowful scene are all visually and mentally immersed in what is happening.

Mary Magdalene is crying at the feet of the dead Christ, other female figures break hands with bitterness, the righteous holy men patiently endure an irreparable loss, sitting with their backs to the viewer, majestic, stocky figures clothed their heads as a sign of mourning, golden-white flying angels are so grieved as humanity.

The general emotional background of the painting “Lamentation of Christ” – a brilliant artistic reception of Giotto. All participants in the event are involved in what is happening, and the position of their bodies, the detailed folds of clothing, the ratio of blackouts and illuminated areas create an incredibly realistic spatial depth of the picture.