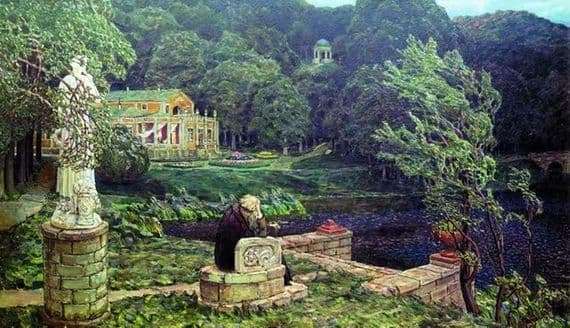 This work was written by Apollinaris Mikhailovich Vasnetsov in 1926. This is the last picture of the artist, which is a kind of reflection of his inner experiences at the end of his life. Absolutely this autobiographical masterpiece.

Looking carefully at this work of art, you should pay attention to the foreground. Before us is green both on the right and on the left. The crown of the trees is strongly bent under the onslaught of the wind.

Strong enough wind bends green grass to the ground itself. In the center of the picture there is a gray-haired old man, immersed in deep thoughts, which completely captivated his mind. Before the old man is a beautiful pond. Be sure to pay attention to the paint, which the author conveys the alarm of violent wind.

In the background, drowning in the bright colors of green, one can see the possessions of a gray-haired old man. On the left in the picture is a path leading from the garden to the house, which apparently led the old man to a brick ledge.

The picture primarily carries a deep philosophical meaning. It contains the Greek Stoic wisdom, the attitude of man towards life and death. The old man, who is in the center of the picture, is at the sunset of his years, like nature, mentally says goodbye to the last rays of the sun.

The main character of the picture holds on to his head, perhaps regretting what’s gone, about what’s been done, about what cannot be returned. A person in unity with nature experiences sadness and nostalgia, and pride in the sincerity and honesty of his life actions. Only if a person lived his life with dignity, at the sunset of his years, he will be able to feel its true beauty, greatness and wealth.

This magnificent work of the artist is filled with a sense of calm and gratitude over the years and is the personification of the transience of the life cycle.