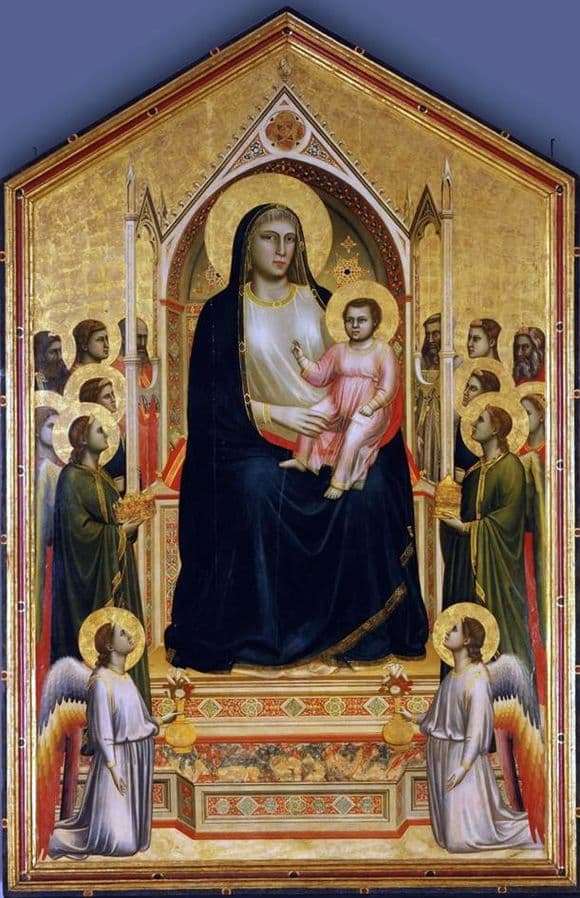 The famous image of the Madonna, sitting on the throne, was painted in Florence by the skillful painter Giotto Di Bondoni. As established by historians, the work on the fresco was completed in about 1310. The artist made it specifically for the Franciscan church.

Creating the “Madonna Onisanti” the author adhered to the traditional iconographic canons in creating her image. The shape and posture of the baby were also similar to similar images. But the only deviation from the iconography of those times was nevertheless.

The holy people and angels, who are located around the throne, are depicted with faces turned in profile. Thanks to this technique, the composition no longer resembled a prayer image. It added efficiency and drama.

On the fresco, the Holy Mother of God is depicted sitting in a half-turn towards the viewer. The majestic figure is emphasized by the deep folds of her attire. Her image is filled with weight and realism. He says that the Madonna is, first and foremost, an earthly woman of flesh and blood, and not an inhabitant of heaven.

On her left knee is baby Jesus, the future Savior of mankind. Mother and child are seated on a golden throne symbolizing the divine kingdom.

This throne is surrounded by many minor characters. Among them are heavenly angels and saints. In terms of density and scale, their figures are significantly inferior to the Virgin Mary. Their clothes are lighter and lighter than hers. The heroes surrounding Madonna are united by one thing. Their faces are reverent. They hopefully turned their eyes on the virgin Mary and her child.

The fresco “Madonna Onisanti” is one of the most beautiful and majestic works of the author. He was able to combine in her subtle divine energy with the density of the material world. Each character depicted here has a volume and energy, which is rare for the iconography of those times.