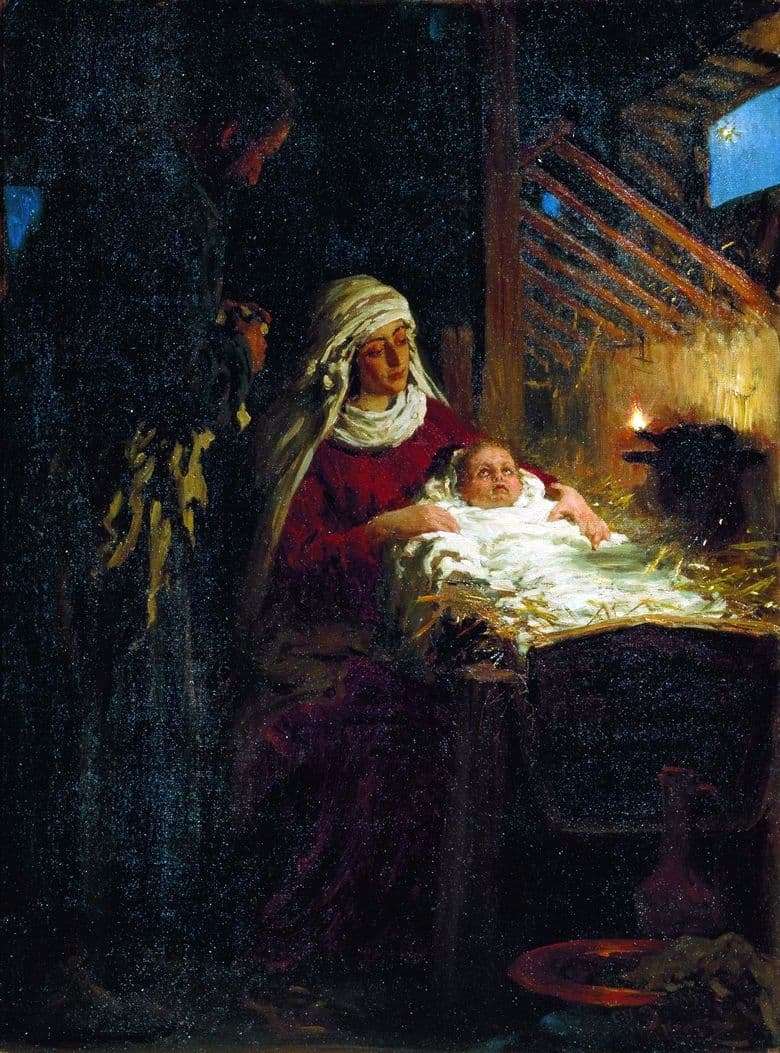 Ilya Repin, the master of the portrait, decided to portray one of the most popular scenes from the New Testament. In this paper, we see the first minutes after the birth of Jesus. In the manger where, according to the Bible, birth took place, Mary, Jesus and Joseph are.

In the painting “Christmas of Christ” we see an absolutely peaceful atmosphere. Mary, the mother of Jesus, is sitting near the newborn future Savior. Repin did not want to transfer events from past centuries into the modern world, as Renaissance artists often did. Therefore, in this work, we see that Maria does not have a European appearance, she is dressed in clothes that are characteristic of those places and of that time. She is wearing a long red dress and a white scarf on her head and neck. Many claim that the red robe, in which the Mother of God is often depicted, is a symbol of blood, which will later be shed by her son.

But now it is still very far from these events, so the mother is absolutely calm. She looks at her child with peace. She put her hands on Jesus’ blanket. The baby is cradled. From above it is covered with a snow-white warm cover. We see only the head of the child. He does not sleep, but does not cry. The child as well as the mother is serene and calm.

Next to Mary and Jesus is Joseph. His figure is depicted in very dark colors, which makes it feel that he is far from the most important person on this canvas. A small candle located near the bed of Jesus, only slightly illuminates the face of Joseph. Near the cot there is a copper basin, on which lies a white piece of cloth. So, the artist depicted the future baptism that awaits the baby.

In the history of fine art there is a small number of works on religious themes, where the tragedy is not depicted. It is believed that only the great tragic story can reach people. Repin went the other way. He managed this work to convey the feelings of a young mother who had just given birth to a child.